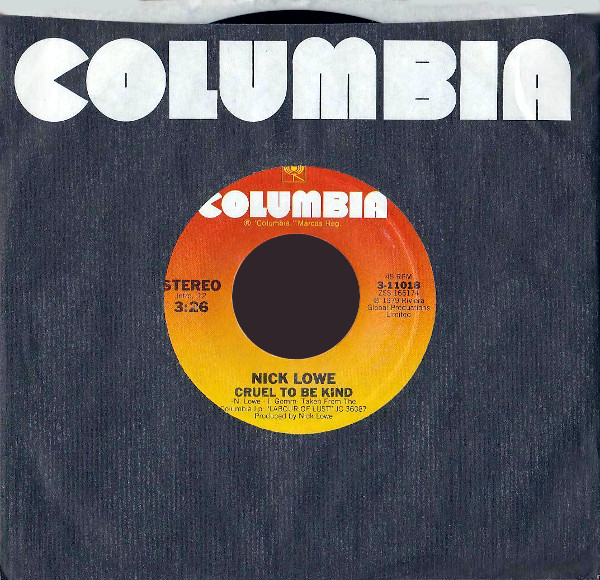 His first (and only) US hit and a new marriage to Carlene Carter are the high points of Lowe’s career.

This is Nick Lowe’s most recognizable hit and was my introduction to the man, barring his production work. Despite the vast number of things I’ve forgotten, I think I remember a television ad with Nick Lowe in a stadium catching guitars promoting the Labour of Lust album while this song played. Co-written with Brinsley Schwarz mate Ian Gomm, Cruel to Be Kind is three-and-a-half-minutes of pop perfection. If pressed, it would be down to this song, “So It Goes” and “Rollers Show” for the title of my favorite Nick Lowe song (and, yes, I’m including that Elvis Costello song in there too).

The B side is a nonalbum track (in the US, anyway), Endless Grey Ribbon, that leans decidedly toward the country side of Lowe’s country/pop interests. A clever idea about a truck driver lamenting his lost youth (the endless grey ribbon is the highway), the song might have been a real winner if Lowe had stuck with it rather than tossing it off half finished. Still, the scraps from Lowe’s bountiful brain are better than most people’s moments of inspiration. Of very minor interest, the song’s title presents us with an opportunity for a helpful anglish lesson: the difference between “grey” and “gray.” Grey is the preferred spelling in England, gray the preferred spelling in America. Earl Grey tea. The gray area in the Geneva Convention. You get the idea.

Back-to-back hits 7-inch single (Canada)
A1. Cruel to Be Kind
B1. Switchboard Susan