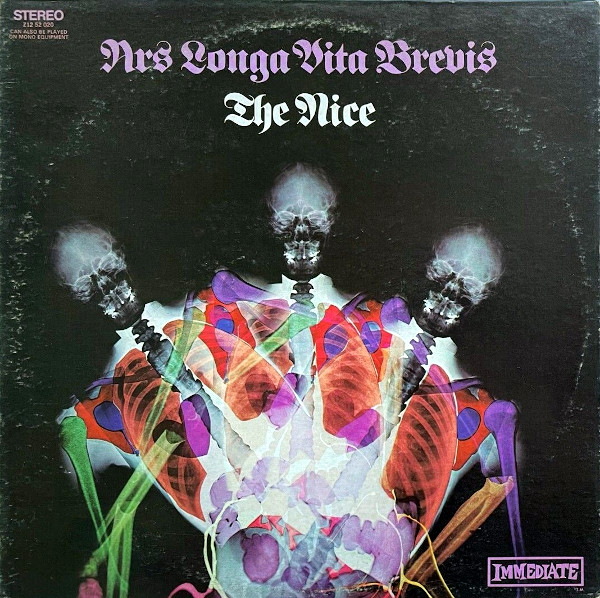 The Nice take the classical rock concept to new heights on this groundbreaking effort.

To my kaleidoscopic mind, the second album cements The Nice as one of the leading lights of the psychedelic/progressive rock movement. Without guitarist David O’List, the group’s music is now clearly aligned with the trio format of Emerson, Lake and Palmer. In fact, had that band elected to carry on as The Nice mk. II, it would be a simple matter to fold this album into the ELP works that followed.

Ars Longa Vita Brevis is a transitional record by design. The first three tracks are trippy, psychedelic rock songs in the vein of their first album and, to some extent, contemporaries like Soft Machine and Pink Floyd. Daddy Where Did I Come From is an imaginary conversation between father and son about the birds and the bees. Little Arabella and Happy Freuds deal with women who are either self-deluded or just plain delusional. After that, the band takes a sharp turn toward classical rock music, with the exception of a song encased in the middle of the Ars Longa Vita Brevis suite.

The merger of classical and rock music that typified ELP is already nearly fully formed here. The Intermezzo from the Karelia Suite could be heard as a dry run for Pictures at an Exhibition, while the instrumental sections on the second side employ the kinds of devices (e.g., drum solos, keyboard solos) that would blossom when Carl Palmer joined the band (although Brian Davison is pretty impressive in his own right). The addition of an orchestra is an element that ELP initially avoided, but it works well here when needed.

The primary distinction between The Nice and ELP is its psychedelic strangeness. Lee Jackson was an unconventional singer, and so the band seems to have decided that unconventional lyrics should be the order of the day. Syd Barrett and Robert Wyatt at least had passable voices, and none of them held a candle to Greg Lake. Even without a proper vocalist, Ars Longa Vita Brevis is an unqualified success. The Nice can lay claim as the first band to truly merge classical and rock music into listenable art that honors the origins of each form. The fact that this album doesn’t show up on more “best of” lists is a shame, since I think it’s every bit as deserving as Soft Machine’s Volume Two or A Saucerful of Secrets.

Cover photograph and x-rays of The Nice by Gered Mankowitz.