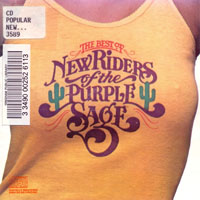 Kronomyth 9.0: THE BUST OF THE NEW RIDERS. Their greatest hits (get it?), although I would have racked ‘em up differently. Since the Riders didn’t even have a pair of hits to call their own, this compilation attempts to pick the best from the first half-dozen Columbia albums, with ample consideration given to their first album. Columbia should have swapped out “Glendale Train” and “Louisiana Lady” for “Groupie” and “Dim Lights, Thick Smoke” or, here’s a notion, added a few more songs and puffed this up to a respectable forty minutes. (At under 31 minutes, this may be the shortest “best of” record on record.) In other words, if you thought Skeletons was slight, this is bone thin. While it’s over too quick, The Best of New Riders of the Purple Sage is pedal-steel perfection and sweet country harmonies the whole way through. These are small, powerful doses of what made the Riders so intoxicating: the mythical drug tales (“Panama Red,” “Henry”), gilded cowboy songs (“Last Lonely Eagle”) and tangential Dead tracks (“Kick in the Head”). So is this the logical place to start in navigating the New Riders? Hell, no. Because it repackages half of the first album anyway, better to just bite the bullet and buy their debut, since song for song it’s better than this Best Of. Also, the complete absence of anything from Dave Torbert seems like a mean-spirited move, seeing as how he’d just jumped ship to join up with Bob Weir in Kingfish. Of course, this compilation doesn’t mark the end of the ride, just ta-ta’s for now.

New Riders of the Purple Sage: The Adventures of Panama Red (1973)