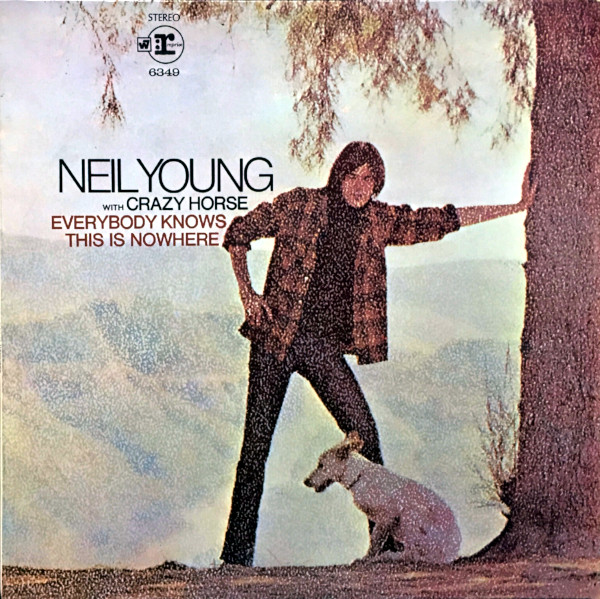 Neil cranks it up a few notches from his last album and emerges as an important new voice in rock & roll.

Neil Young had so far scratched at greatness on songs like “Mr. Soul” and “The Loner.” On Everybody Knows This Is Nowhere, he rips its heart out. The record finds Young with a working band behind him, and the result is more than a little like when Bob Dylan brought in The Band: electrifying. In fact, Young comes off as a cross between Bob Dylan and a dire wolf. Now, The Byrds and not Dylan are the obvious reference point, but The Byrds never made an album that was this serious for so long or rocked so hard. In other words, you’re not going to find any fancy 12-string electric guitar solos on this record; the electric guitars of Young and Danny Whitten sound more like a double-barreled shotgun.

The first thing you’ll notice about Everybody Knows This Is Nowhere is the depth of the material. The almost breezy but ultimately haunting Cinnamon Girl, the bleak and burned-out Down By The River and the album’s epic finale, Cowgirl in the Sand. (Young claims to have written all three in one day while home with a fever but, if that were the case, he would have spent a lot more time in malaria-infested regions.) Until now, Young struggled with long-form narratives. I always had the sense before that he was trying to write great songs. On Everybody Knows This Is Nowhere, he tries singing great songs. It’s an important difference, because it puts the emphasis on the persona, which carries through and connects the music. Anyone could have written “I Want You,” but that it was Dylan singing it (and the way he sang) made all the difference in the world. Nobody sounded like Neil Young does on this album.

The opening “Cinnamon Girl” initially seems like a sweet gesture, but the growling guitars underneath have as much in common with heavy metal as country-rock. Everybody Knows This Is Nowhere is closer to the “gee shucks” country-rock of Poco, only more self aware. A young Robin Lane joins Young for a duet on the downbeat but pretty Round & Round. And this is probably as good a place as any to mention that this album really set the tone for future albums from Neil Young. Everything after Everybody would be dark, intense, emotionally parched. You can’t escape it on “Down By The River,” as bleak a narrative about lost love as you’ll ever hear this side of “Hey Joe.” The blasts of guitar from Young and Whitten, which appear throughout the album, are brutal and brilliantly placed here.

The second side starts out with The Losing End, and it speaks volumes of the album that a song about an unfaithful lover might be its lone moment of levity. Running Dry is its polar opposite: a dirge complete with heartbreaking violin that immediately reminded me of The Byrds’ “I Come And Stand At Every Door.” At over ten minutes, Cowgirl in the Sand is the longest song he’s recorded to date. But where other attempts at long-form writing suffered by Young overwriting them (“Broken Arrow,” The Last Trip to Tulsa”), he replaces intellect with emotion here. And this is the point I guess I was trying to make earlier about Dylan; you’re not transfixed by “Cowgirl in the Sand” for ten minutes because it has ten minutes’ worth of great lyrics and ideas, but because you want to spend ten minutes with the person playing it. Also, you’ll never hear the electric guitar played more poorly (in the sense of eschewing proficiency), primitively and powerfully than here.

Being the prickly character that he is, there exists only a small stretch of albums that constitute classic, commercially successful Neil Young, beginning here and ending with Harvest. I didn’t much care for David Briggs’ production on the first go ‘round, but I think Everybody does an outstanding job of bringing Young’s feverish intensity to life. The use of distortion on “Cinnamon Girl” and “Cowgirl in the Sand” seem prescient in the wake of the alternative rock movement. Crazy Horse also does a solid job here, steady but not flashy. And Neil Young’s vocals deserve a special citation, as he seems (like Dylan) to have turned his natural cragginess into a richly expressive and palpably human palette.

All selections written by Neil Young.

Original 8-track version
A1. Everybody Knows This Is Nowhere
A2. Cinnamon Girl
A3. Down By The River (beginning)
B1. Down By The River (conclusion)
B2. Running Dry (Requiem for The Rockets)
C1. Round and Round (It Won’t Be Long)
C2. The Losing End (When You’re On)
D1. Cowgirl in the Sand