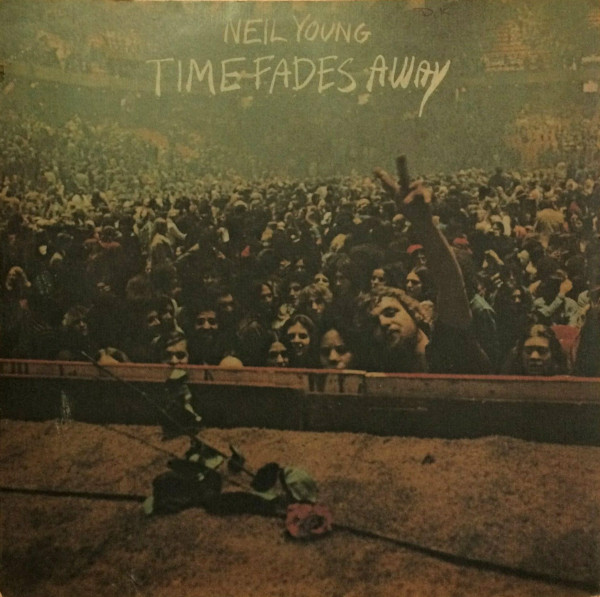 A ragged chronicle of the Harvest tour with songs you’ve never heard before.

Kronomyth 5.0: Then time will tell who has fell and who’s been left behind.

The mythology of a man is formed not just from his triumphs but from his failures. Time Fades Away is a spectacular failure. It’s a raw, reckless record that chronicles a tumultuous period in the life of Neil Young.

The three-month, 65-show tour it more or less chronicles was marked by strife and sadness from the outset. Former guitarist Danny Whitten, the proverbial prodigal son, had been turned away at the door because of his drug abuse and was found dead the next day. The band bickered over money and remained at odds with each other throughout the tour. Add tequila to the mix and you have a cocktail for disaster.

As with Bob Dylan before him, some fans rejected the image of Neil Young the ragged rocker. They wanted the sound of his last three albums replicated on stage. Young, in what would become a signature move, didn’t give the people what they wanted. When the time came to release a live album of the tour, he intentionally selected songs that had never before appeared on an any album. Confusion ensued, critics revolted and Young washed his hands of the whole affair.

You would think, then, that Time Fades Away is a terrible record. The material is average at best. The performances are unrepentantly sloppy. Yet the experience of listening to this album is something unique and, in its own strange way, rewarding. The reward is the opportunity to get closer to the enigma that is Neil Young, to hear the artist and the outlaw within him struggle for control and, ultimately, lose control. The flat singing and rough guitar playing might have seemed a caricature of the man who produced Harvest and After The Gold Rush, but it was probably the truest picture yet of the man inside.

The opening Time Fades Away immediately recalls the rollicking sound of the early electrified Bob Dylan. The vocals are crap, the playing is sloppy and it’s still a pretty great song. Journey Thru The Past is one of several solo numbers – Young had split the live show between solo and band performances – that is more or less what you’d expect from a Neil Young piano ballad at this point. Yonder Stands The Sinner is a scorching rocker that features a cameo from David Crosby. You know your band is partying too hard when David Crosby isn’t the most messed-up guy in it. L.A. might be the best song on the album. And here’s where I would stop and point out that the new songs from Neil, while not among his best, are hardly a handful of throwaways. Love in Mind, which closes out the side, is the lone anomaly: a ballad recorded live in 1971 that is probably as close as Neil Young will ever come to sounding like Todd Rundgren.

Following the pattern of alternating rockers and piano ballads, side two kicks off with a (presumably autobiographical) childhood story, Don’t Be Denied. Again, it’s not the best song he’s ever written, but I honestly prefer listening to this rather than hearing him play “Southern Man” poorly. The Bridge is the last of the piano ballads, a yawn before the big finale that reunites Young with Crosby and Graham Nash, Last Dance. Crosby and Nash do their best to harmonize with Young (whose voice at this point was a moving target). The song ends the record on a high note of energy, although you can’t help but think that the closing chorus of “No, no, no” sounds like a man in the throes of a feverish nightmare.

Time Fades Away is, in a lot of ways, a nightmare. But there is something fascinating about other people’s nightmares. Looking back, you can see this as the moment when the wheels came off the track. The golden harvest of old was gone, and seasons of bitter fruit would follow. All my scattershot analogies aside, the shock of hearing this album today hasn’t diminished, despite its author’s own disavowal of it. He could have easily hidden behind his hits. Instead, he presented us with songs that weren’t fully baked with a band that clearly was. It wasn’t a smart career move, but then Neil Young was never a career man.