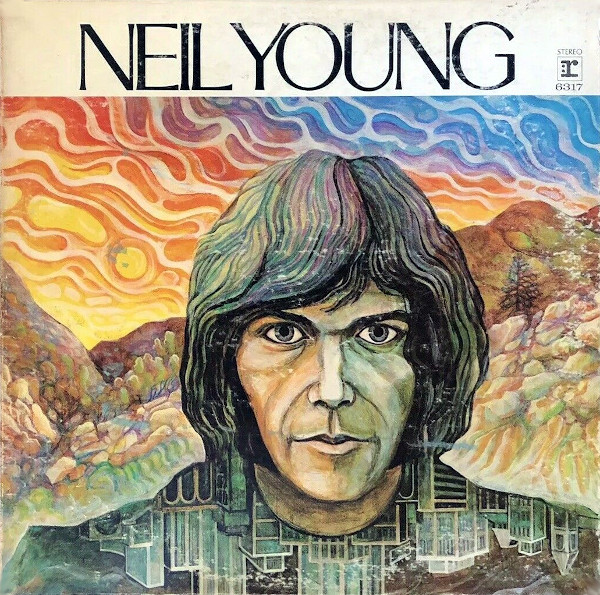 A fine collection of songs with a surprising range, although only “The Loner” stands out as a classic.

Neil Young was the first member of Buffalo Springfield to release a proper solo album. As the best of that band’s songwriters (and also the most unpredictable), many were interested to hear what Young would come up with on his own. His first record is more or less an extension of his work with Buffalo Springfield: fuzzed-out electric guitar, folk/pop with psychedelic touches, ambitious arrangements that sometimes overreach their audience and a certain lyrical obtuseness that suggests a more rustic Bob Dylan.

Although it’s a good record on many levels, Neil Young really found his voice on the albums that followed. A fair comparison may be Joni Mitchell’s first album, which featured a similar-looking portrait of the artist on the front cover. Mitchell’s album used spartan production where Young’s is probably overproduced, but both are the works of important artists that pointed to a promising future. Outside of “The Loner,” nothing on Neil Young would qualify as classic material. You’ll enjoy the gilded country pop songs and get riled up by his cranky disposition, then put this back on the shelf next to Poco’s first album and go back to listening to Harvest or After The Gold Rush.

A review of side one

I really need to find better titles for these sections. Neil Young, I suspect, likes to mess with people’s heads. The Emperor of Wyoming challenges expectations with a breezy instrumental that sits square in the new country/rock camp. A kind of song without words, it sets you up for a country-rock record that never arrives. The Loner is its polar opposite: a return to the burned-out, blackened rock & roll of “Mr. Soul.” It’s easily the album’s best track, with lyrics that capture the subject so well, you can’t help but wonder if Young isn’t singing about himself. If I Could Have Tonight is psychedelic pop that finds common ground between The Beach Boys and Buffalo Springfield (cf. “Out of My Mind”). I’ve Been Waiting For You shifts slightly to The Beatles and benefits from a neat bass line from Jim Messina. Side one ends with The Old Laughing Lady, a dull and dour song that sees Young still struggling to lasso in long-form songs.

A review of side two

The second side of Neil Young more or less follows the pattern of the first side. There’s an instrumental intro, String Quartet From Whiskey Boot Hill, this time courtesy of arranger/pianist Jack Nitzsche, a few folk/pop songs and a long ending. Here We Are is surprisingly sentimental, an idealized view of country life that had me thinking of Paul McCartney’s early solo stuff. What Did You Do To My Life? is a romantic pop song with fuzzy guitars that may or may not be a victim of the initial album’s remix*, since it sounds a bit shrill to my ears. If Neil Young doesn’t immediately evoke thoughts of Motown, you owe it to yourself to hear I’ve Loved Her So Long, which is as close as he’s come yet to writing a Smokey Robinson song. The Last Trip To Tulsa is Neil’s big statement at the end, a story rendered in dream imagery that suggests Bob Dylan on a bad trip. I would tell you that it ends the record on too serious a note, while others would tell you it’s a fountain of wisdom.

The initial version of Neil Young was encoded using a new technology that apparently altered the sound to Neil’s dislike, so a new version was remixed and released two months later in 1969. I haven’t heard the original version, although it would make for an interesting bonus disc if anyone gets around to releasing a deluxe edition of this someday. Stephen Stills released a version of “The Loner” on Illegal Stills and, yes, it’s the best song on that album. Jim Messina (a member of Buffalo Springfield in its later days) and George Grantham would go on to join Richie Furay in Poco. Despite the presence of a young Ry Cooder, who had previously worked with blues revisionists Taj Mahal and Captain Beefheart, there is no blues to speak of on Neil Young and very little guitar work that stands out in my mind beyond the acid/fuzz guitar sound that Neil had already established with Buffalo Springfield. Maybe it just got buried in the mix.

A1. The Emperor of Wyoming
A2. The Loner
A3. If I Could Have Her Tonight
A4. I’ve Been Waiting For You
A5. The Old Laughing Lady
B1. String Quartet From Whiskey Boot Hill (Jack Nitzsche)
B2. Here We Are In The Years
B3. What Did You Do To My Life?
B4. I’ve Loved Her So Long
B5. The Last Trip To Tulsa