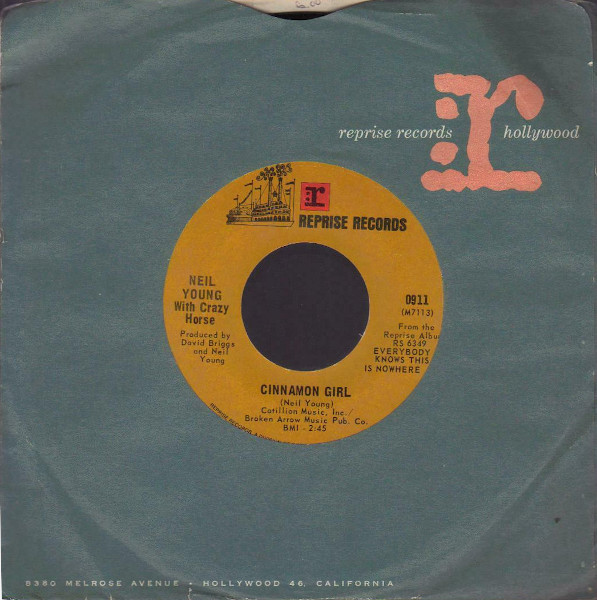 A belated single from Neil’s second album featuring a different vocal mix than the elpee version.

Neil Young and Crazy Horse made a beautiful noise. Their music suggested a stoned, transcendent calm in the middle of a psychedelic sandstorm of motion and emotion. At least, that’s the way I feel when a song like Cinnamon Girl is playing. The opening track from Neil’s second album, Everybody Knows This Is Nowhere, “Cinnamon Girl” is a love song recorded in the middle of the rock & roll machinery of drugs, freedom and surreality. When Neil Young sings “You know how baby loves to dance,” what follows is a psychedelic trip where one guitar note becomes a symphony of sound.

The single version of “Cinnamon Girl” features a noticeably different vocal mix from Neil Young and Danny Whitten. It also cuts out the guitar outro at the end. I prefer the original vocal mix, and history seems to have landed on the same side.

The B side in most of the world was a live acoustic performance of Sugar Mountain recorded in 1968 in Ann Arbor, Michigan at The Canterbury House. Written about a teen-only club that Young would soon be barred from visiting (he wrote the song in 1964 when he was 19), it became a brilliant allegory for lost childhood. Although the song was included in his early demo tapes, it has only appeared in live versions here and on Live Rust.