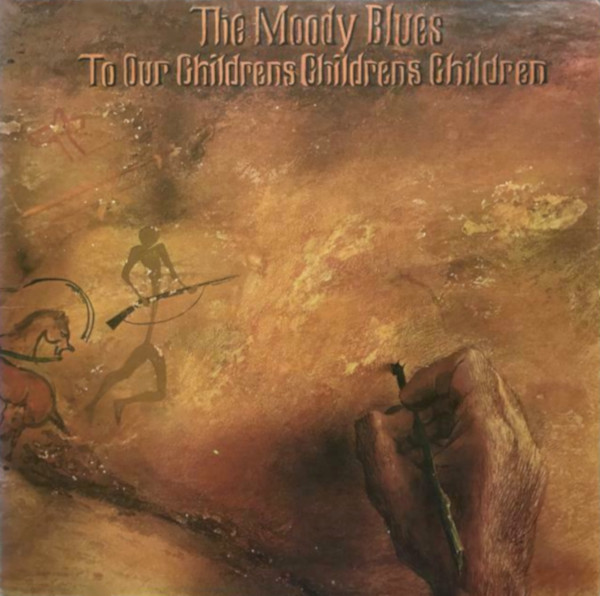 Inspired by the lunar landing, the Moodies make an album about space travel that nearly reached the top of the charts.

The moon landing was a milestone in history that gave pause to reflect on our relationship to the universe and our place within it. The Moodies paused long enough to write an album around it, sort of, on To Our Children’s Children’s Children. The record is, itself, something of a milestone among Moodies albums in that it was the first released on their own record label, Threshold, which was distributed through London Records. Otherwise, it’s a continuation of the shared songwriting format established on In Search of the Lost Chord.

Although the Moodies weren’t a rock & roll band in the traditional sense—their songs neither rocked nor rolled most of the time but, rather, floated—previous albums were more grounded in elements of rock. Children has only a couple songs that could be considered heavy and, among those, one is an instrumental while the other lasts just over a minute. The rest of the album is stitched together into a gossamer structure of acoustic guitars, mellotron and melodies that dissipate into the air. The overall impression is like a long and lovely sighing over space.

Side one opens with another piece of poetry from Graeme Edge, Higher and Higher, that literally launches the space concept. Eyes of a Child, Part 1 is an uncharacteristically gentle song from John Lodge that could be viewed as the album’s title track in its invitation to see the universe through childlike eyes. Floating continues the theme in typical Ray Thomas fashion (his songs often sound like children’s songs), and Lodge teases us with a rock song that never was with Eyes of a Child, Part 2. Justin Hayward the songwriter makes a brief cameo with a solo acoustic performance on I Never Thought I’d Live to Be a Hundred. It is, surprisingly, the only Hayward song on the first side. Beyond is an adventurous instrumental that suggests Edge has a very good soundtrack album in him; the song is more interesting than anything on George Harrison’s Wonderwall Music, and that wasn’t a terrible record. A rare collaboration between Mike Pinder and John Lodge, Out and In, closes out the first side on a classy note with another song about meditation (a familiar theme for Pinder).

The second side starts with the shoulda-been single from Hayward, Gypsy, one of many songs from the period that romanticize the astronaut as an heroic archetype. In fact, radio stations semi-officially adopted this as the album’s ambassador, something you could do back in the days when “album-oriented rock” actually meant queuing up albums on a turntable. Eternity Road continues the space traveler theme and is the weightier of Thomas’s several contributions. John Lodge’s Candle of Life sounds for the life of me like a Mike Pinder song (cf. “Have You Heard”) and is my favorite track on the entire album, even if it doesn’t have a blessed thing to do with outer space. Sun Is Still Shining returns to inner space and features Eastern sounds but is sung too quietly. (The mix on this album is problematic, perhaps because there was so much sonic detail in every track, and there are more than a few times when I wished the guitars or vocals had been turned up.) A second short reflection from Hayward, I Never Thought I’d Live to Be a Million, gives ways to the almost-dreamlike ending of Watching and Waiting. Written with Ray Thomas, it’s a wistful fairytale song that is more at home in The Wind and the Willows than the wide expanses of space. Like I said earlier, this is sort of a concept album about space, but with some other good ideas mixed in.

And this is the point in the review where I tell you that To Our Children’s Children’s Children is not my favorite Moody Blues record. Its tongue-twister of a title aside, I found the previous three records to be more toothsome. It is ambitious, yes, but too amorphous, as if the notes themselves were scattered by the weak gravity of space. In a remastered version with headphones you can capture more of the sonic detail, but a good remixing is what it really needs. It’s still a classic album—how could a Moodies record about space travel not be?—but it’s also a little, um (squirming uncomfortably), precious and wimpy. There, I said it: The Moody Blues are a little wimpy. Now, to listen to some Motörhead (since it’s all a question of balance).