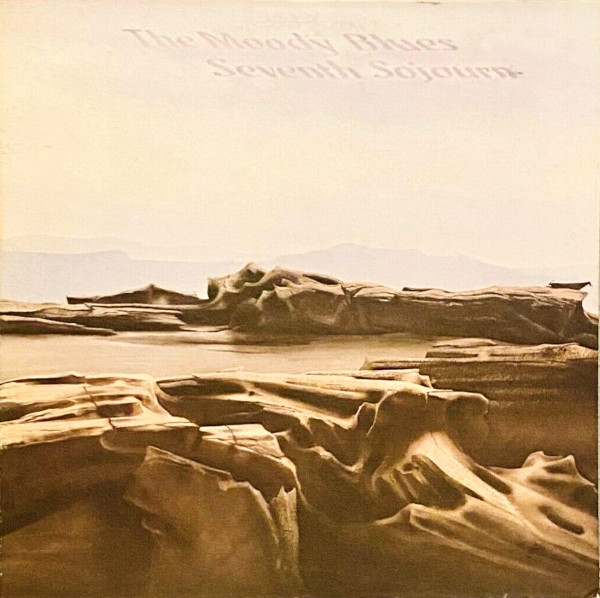 The band’s last album before a five-year hiatus continues their winning ways with some of the strongest material of their career.

Song for song, Seventh Sojourn is one of the strongest efforts from The Moody Blues. Unfortunately, it gets off to an awfully slow start with Mike Pinder’s Lost in a Lost World and never really finds its way. Instead of a cohesive collection of songs under a unifying theme, the record is a series of standout, spotlight moments that deliver the chills and thrills you’d come to expect from the Moodies, minus the cosmic camaraderie found on their earlier works.

Listening to it from the benefit of hindsight, there is a creeping malaise at work in the music. Or maybe it’s the absence of really meaningful interplay in the arrangements. Pinder provides some masterful keyboards, Justin Hayward experiments with an electric guitar effect that sounds suspiciously like the gizmo, but the contributions of Graeme Edge and Ray Thomas seem to get lost in the mix. Had the band arranged the track order differently, Seventh Sojourn might have been a more pleasant journey. Simply swapping “Lost in a Lost World” with You and Me would have made a world of difference. But I’m beating a dead horse. On to the music…

The opening track from Pinder, “Lost in a Lost World,” feels like David Bowie in a Brechtian mood covering Al Green’s “Take Me to the River.” (Take that, horse.) The gray skies quickly part, however, with the arrival of Hayward’s New Horizons. One of the prettiest songs he’s done, this would have been a single under normal circumstances, yet here would probably be fourth in line. What follows is Ray Thomas’ lone songwriting contribution, but what a song it is! For My Lady is hands-down my favorite Moodies song of all time; a sweet sea chanty that wears its chivalrous heart proudly on its sleeve. (I have very few memories because of faulty wiring, but one that I’ve managed to hold onto is the memory of hearing this song for the first time in a college dorm room. Time, you thief, who love to get sweets into your list, put that in*.) The side closes with a reprise of the band’s recent single, Isn’t Life Strange, in which John Lodge classes up the place with classical themes and tremulous voice.

Side two starts with “You and Me,” a kind of cross between “Question” (musically) and “Give Peace a Chance” (lyrically). Again, under different circumstances, this might have been a contender for a second single. The Land of Make-Believe is pure sunlight, as Hayward crosses over into Thomas’ fairytale land for a love song. Pinder tries to bring everyone down again with When You’re a Free Man. (They didn’t call them the Moody Blues for nothing.) Honestly, Pinder’s songs always felt oddly out of place in the group, despite how integral his playing was to the band’s sound. An enigma, that. And, finally, we encounter the album’s hit single, I’m Just a Singer (in a Rock and Roll Band). Here we get a taste of the future Moodies with a rush of melody and mellotron a-blazin’. In a word, epic, even as it seeks to deflate the band’s own mythic stature.

After eight albums (it was only Hayward and Lodge’s seventh sojourn with the band), the Moodies decided to take a well-earned break. As it turned out, this sojourn lasted longer than expected, with the band regrouping for only one more album, 1977’s Octave, after which founding member Pinder went his own way. It wasn’t, however, the end of the Moody Blues. But that’s a voyage for another day…

Cover and liner art by Phil Travers. Inner sleeve by The Moodies.