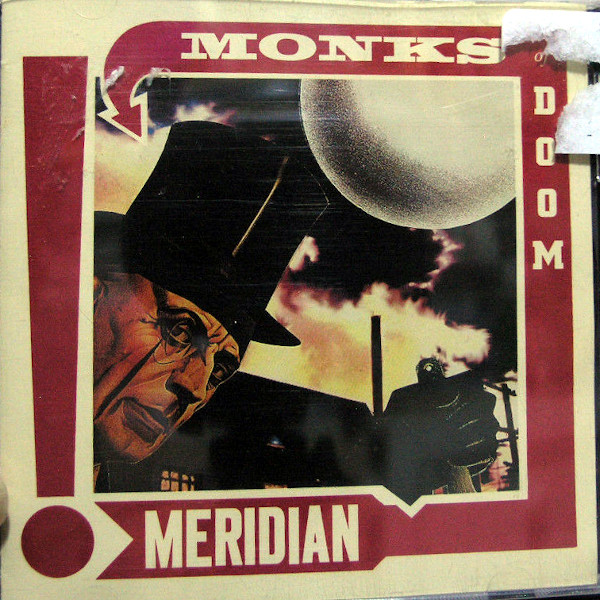 Another tasty musical feast of 90s alternative rock that sounds like CvB in a cranky, proggy mood.

Kronomyth 3.0: I have crossed between the poles, for me there’s no mystery.

Meridian is an antidote to the quotidian. It’s the most serious attempt yet by Monks of Doom to forge a viable path forward for their music. On a label no one ever heard of. You can guess how well that went.

I’ve been rooting for the Monks ever since Breakfast on the Beach of Deception. The followup, Cosmodemonic Telegraph Company, suggested that the band could make a decent of go of it if they focused their energies on alternative rock/prog songs with actual lyrics and toned down the whole Armenian folk revival thing, a holdover from youth camp. And that’s exactly what they do on Meridian. At their best, the band sounds like a cross between R.E.M. and Pixies with a liberal helping of latter-day Camper van Beethoven tossed into the mix. But their best still doesn’t translate into anything resembling a hit single, which is where they fall short of CvB’s other alter ego, Cracker.

Subsisting on a cadre of loyal Camper fans isn’t exactly a marketing strategy. So, let me pump up the Monk’s stock a bit by saying that they represent what was most noble about the early 90s alternative rock movement. They were talented noisemongers who could play their instruments, similar to better bands with worse names like Butthole Surfers and Flaming Lips. The two-channel battle of electric guitars from Greg Lisher and David Immerglück recalls those classic pairings on Lou Reed’s records. And there was a musical chunkiness or spikiness (spunkiness?) to their arrangements that is equal parts Red Hot Chili Peppers and Captain Beefheart. (More on the Cap’n later.)

And now for the short sell: the band desperately needs a decent singer. And I’m saying this as someone who actually enjoys David Lowery’s voice, which doesn’t set the bar impossibly high. Victor Krummenacher sings like you would expect Snidely Whiplash to sing, with sardonic cruelty in his voice. Immerglück’s voice is the more likeable of the two, but he’s not lead singer material either. The result often sounds like alternative rock that has curdled under a withering sun.

If that sounds harsh, it probably stems from my frustration that the band wasn’t able to parlay their revolutionary manifesto into a tangible victory. Door to Success and The Harbor Incident prove that the band is capable of writing good songs that wouldn’t cost a radio programmer their job. Cherry Blossom Baptism and Turn It on Himself reveal their ability to spawn dark, funky monsters. Miracle Mile is even sweet. The CD format’s one great failing, in my opinion, is that it “forced” bands to write more and longer songs. As a result, a lot of albums from the early 90s had three or four songs that weren’t really necessary. Here, they’re mostly the instrumentals and maybe The Traveler.

Although Monks of Doom never got a lot of love from the prog community, I believe that’s an oversight. Hieroglyphic is clearly influenced by latter-day King Crimson and the second half of Circassian Beauty is an open love letter to Captain Beefheart. As the musically adventurous side of CvB, Monks of Doom might as well have taken a vow of poverty, but what the world didn’t need then (and still doesn’t need now) is more Crackers.

All songs written by Monks of Doom.