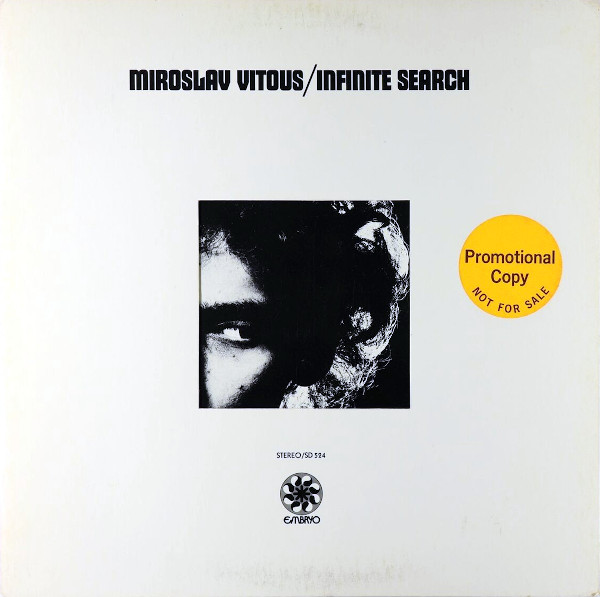 The first solo album from the new bass wunderkind is one to Czech out.

A storm was brewing. As it gathered force, the stormclouds assembled in shifting configurations. At the silent center of the storm, of course, was Miles Davis. During this time, the arrival of a young Czech bass player, Miroslav Vitous, was welcomed by Chick Corea with singing and sobbing. Although he never joined Miles’ entourage, Vitous caught his ear long enough to briefly attract several of Miles’ brightest stars for his first solo album, Infinite Search. Vitous would soon reappear on the seminal Zawinul, and the rest, as they say, is meteorological history.

Vitous was restrained on Now He Sings, Now He Sobs. There are no restraints on Infinite Search. The bass is unleashed and a wild chase ensues, led by Vitous with the incredible drumming of Jack DeJohnette hot on his heels. The opening track, Freedom Jazz Dance, last seen in the company of Miles Davis, here gets an even more radical treatment. Although I still prefer the original version by Eddie Harris, Vitous and the group hold nothing back on this one. Herbie Hancock and John McLaughlin deliver an endless stream of amelodic notes while Joe Henderson soars over the tempest, serene. The short Mountain in the Clouds is another tumbling tussle, this time just between Vitous and DeJohnette, that ends too quickly.

McLaughlin and Hancock return to the fray on When Face Gets Pale, otherwise notable for the swaying melodies that Vitous frequently employed as the foundation for his compositions. Infinite Search sways, thoughtful, with glittering notes from Hancock and McLaughlin that feel like light refracted. Henderson returns on I Will Tell Him on You for a slightly unhinged solo while DeJohnette flies completely off the hinges. The album ends on a high note with the vaguely Eastern, exotic Epilogue.

Infinite Search is an impressive first album that, together with Zawinul, justified the excitement of jazz critics when Weather Report appeared. Fans of McLaughlin and Hancock aren’t likely to rank this among their favorite sessions from the artists, although Jack DeJohnette fans will want to search for this. In later years, these sessions were remixed, augmented with one additional track and released variously as Mountain in the Clouds and The Bass.

All selections composed by Miroslav Vitous unless noted.