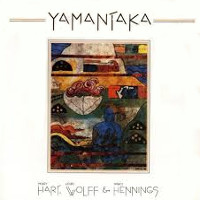 Kronomyth 3.0: SOMETHING FOR THE HUNGRY DEAD(HEADS). In the 70s, Henry Wolff and Nancy Hennings recorded two albums featuring the sounds of Tibetan bells: Tibetan Bells (1971) and Tibetan Bells II (1979). Sonorous and otherworldly—literally, in the sense that the bells were traditionally used to communicate with the dead (hungry ghosts in particular)—these records have been cited as some of the earliest examples of new age music. Clearly, the music spoke to at least one member of the Dead, Mickey Hart, who collaborated with the pair on their next album, Yamantaka. For those of you without the Gods & Demigods supplement to the Dungeon Master’s Guide (only kidding, since I don’t think he’s in there), Yamantaka is a Buddhist god of the underworld who often manifests with multiple arms and heads, most of them angry looking. It’s not clear to me whether the music of Yamantaka is intended as a meditation on death, a musical offering to the god himself or something in between. There are moments on both “The Revolving Mask of Yamantaka” and “Yamantaka” that feel like landscape paintings of the afterlife; bells ring through an endless wasteland, sounds hum with the tedium of eternity, lost souls loom with no physical frame of reference. I couldn’t tell you how this compares to the first two Tibetan Bells, although it seems that Mickey Hart’s contributions expanded the landscape to include a mix of exotic and innovative instruments. I can tell you that Yamantaka is an interesting trip for navel-gazers, although at 35 minutes it might have been a longer trip. The later CD reissue switches the order of the original two tracks and adds three new compositions from Hennings and Wolff to the mix. The new songs fit more easily into the “new age music made with Tibetan bells” category, noting that if any such category does exist, it owes its existence to the original Tibetan Bells albums and, perhaps moreso (given the visibility that Hart brought to the project), to Yamantaka. Unless you’re inclined to sit still for forty minutes of ambient music, a good ten minutes of which is simple resonance, you can pass on this record. But if you believe that music can consist of nothing more than finger cymbals and feedback, a new world awaits on Yamantaka.