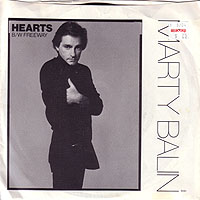 Kronomyth 1.1: BALINTIME. This is the biggest hit of Marty Balin’s solo career, an MOR ballad that might well have been the next big hit from Jefferson Starship if Fate hadn’t intervened to preserve whatever tiny shred of rock credibility remained to Captain Kantner’s expedition. “Hearts” was written by Jesse Barish, a songwriter who had already written a handful of songs for Balin to date, including his last big hit, “Count On Me.” In case you care, this is a slightly edited single version that runs about 30 seconds shorter than the elpee version. The B side is actually the more interesting of the two: a non-album, new wave-styled song called “Freeway” that was one of several tunes sold to Balin by Shyanne’s Eric Burgeson and songwriting partner Terry Turrell. I’ve probably said this somewhere before, but Marty Balin would have made a great A&R guy, since he had a nose for good songs.

The Players
Both tracks were produced by John Hug and engineered by Tom Flye.