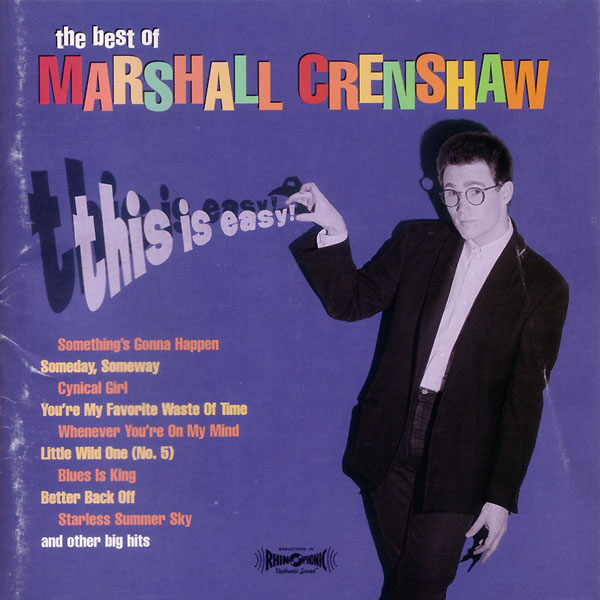 Leave it to Rhino to champion the retro-rock prince of new wave with a 22-song, career-wide compilation.

If history rewards consistency, Marshall Crenshaw will have a kingdom to call his own someday. Not only were his albums uniformly excellent from track to track, but album to album. This Is Easy! presents 22 rock-solid tracks in chronological order, yet you could have swapped any track here for any other, inverted the order, and the sum effect would still be the same. Listen to the first song on here, “Something’s Gonna Happen,” and the last, “Starless Summer Sky”—they could have come from the same album. That holds for any two tracks on here. Because of that consistency, The Best of Marshall Crenshaw won’t make a convert of you where his eponymous debut or Downtown didn’t. His best songs contain just a little more of the minor-key magic and slightly grander choruses than you’d find setting the needle down at random on any Crenshaw record.

Hearing music like “Someday, Someway,” “There She Goes Again,” “Mary Anne,” “Calling Out For Love (At Crying Time)” or even “For Her Love,” you may agree that popular radio did listeners a disservice by not championing Crenshaw. Ironically, the retro-minded songwriter was ahead of his time, merging country and rock at a time when the two were separated like church and state. “I’m Sorry (But So Is Brenda Lee)” and “Little Wild One (No.5)” were great songs, sure, but country stations weren’t going to play music by a skinny city kid in John Lennon glasses (bolo or no bolo) any more than they were going to play Elvis Costello’s Almost Blue. Rock stations went through their rockabilly phase, but Crenshaw wasn’t deemed enough of a novelty to hitch a ride on that bandwagon (in fairness, stations weren’t falling over themselves to play Dave Edmunds or Nick Lowe either, noting that neither was a consummate songwriter of Crenshaw’s consistency).

Rhino does a really nice job of this one, as usual, including illuminating track-by-track liner notes from Cub Koda and Crenshaw himself. I had really hoped “Mary Jean” would turn up on here, but that’s my only gripe. Otherwise, This Is Easy! is easily the most generous single-disc introduction to Marshall Crenshaw.