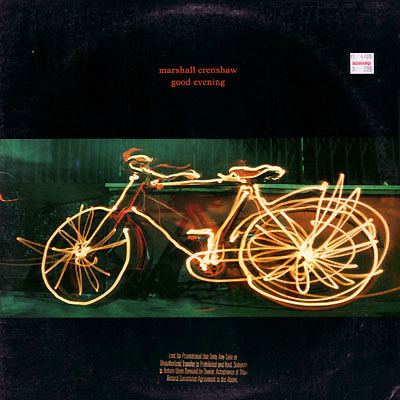 Crenshaw makes half a cover album with half of Joe Jackson’s original team, all of it in good taste.

If you’d told me five years ago that Marshall Crenshaw would require the services of Diane Warren to write a hit song, I would have laughed. I’m not laughing now, but I’m not crying either. Good Evening is a good album, even if Crenshaw’s pen accounts for less than half of it. As he showed with Ben Vaughn’s “I’m Sorry (But So Is Brenda Lee),” it’s not so much about where a song comes from as where Marshall takes it. A musicologist as well as a musician, Marshall Crenshaw knows where to find great material: Richard Thompson, John Hiatt, Bobby Fuller. Even a cover of The Isley Brothers’ “Live It Up,” one of the few missteps on Good Evening, is an informed choice. Otherwise, this is Crenshaw doing what he does best: likeable love songs sung in his familiar twang and smartly played.

“Valerie” and “Someplace Where Love Can’t Find Me” are the obvious winners, “Let Her Dance” and “She Hates To Go Home” the honorable mentions. Warren’s “Some Hearts” is something of a low point, though Crenshaw gives it a more dignified reading than it deserves. All totaled, Good Evening is a more entertaining ride than Mary Jean, and with Crenshaw at the wheel, Joe Jackson producer David Kershenbaum in the pit crew and Graham Maby along for the ride, it doesn’t really matter who manufactured the chassis. I have no doubt that Marshall could make a very good cover album someday and imbue it with enough of his own personality that it would blend right in with his best work. Good Evening already has one foot in that direction, and critics have stood firm on the point that original or cover, it’s still Crenshaw.