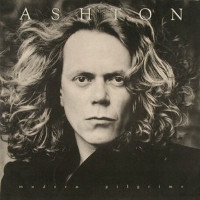 In chasing down the work of Rare Bird through the ages, I came across this 80s comeback album by Mark Ashton, their original drummer. Ashton recorded a couple albums with and without his band, Headstone, which I haven’t heard. Produced by Paul A. Rothchild (The Doors) and featuring ex-Asia guitarist Mandy Meyer, Modern Pilgrims is a modern-sounding studio rock record that invites some comparison to the atmospheric, “big” sound of Robert Plant. No doubt label RCA was happy to evoke the comparison: Ashton with wind-blown hair and steely gaze surrounded by slightly younger guns. The trouble is that Mark Ashton is no Robert Plant. Ashton’s vocal range is rather limited; the man makes Alice Cooper sound like Ronnie James Dio. Fortunately, the quality of the songs themselves do most of the talking. “Black And White” (which recalls Zep’s “Kashmir”), “Are You Ready,” “A Breath Away” and “Genie In The Jar” are good period pieces from the age of arena/synth rock. They’re a little on the wordy side, but the wordplay is at least intelligent. I’m sure there are albums from bigger names in the 80s that deliver less. The trouble with comeback albums, of course, is that audiences don’t always come back, particularly those that weren’t heavily invested from the beginning. Few made the journey for Modern Pilgrims, and Mark Ashton receded into the music machinery. Modern Pilgrims is ultimately product, but it’s good product that probably deserved a warmer reception.