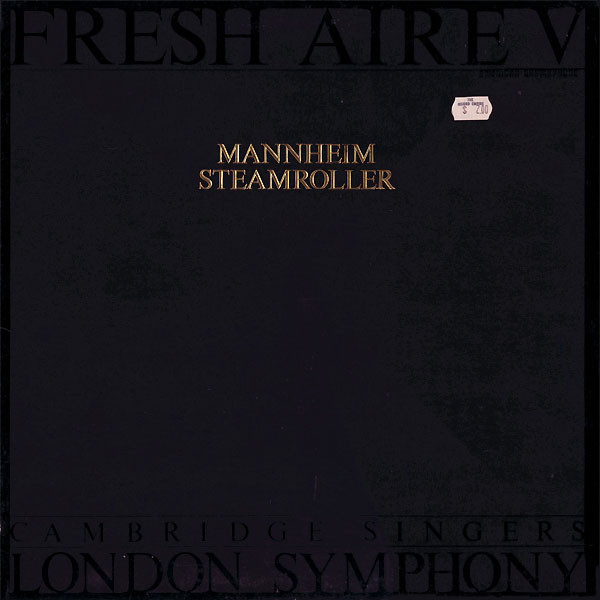 Chip Davis turns his composer’s eye from the four seasons to one of the earliest science fiction works, Johannes Kepler’s Somnium.

This might as well have been called Fresh Aether I, as the music of Fresh Aire V is based on the novel, Somnium (written by Johannes Kepler), which takes place (at least in part) on the moon. This is the same source as “Dream” that last appeared on Fresh Aire 4, and so you could see Fresh Aire V as a seamless continuation of the series, although it really isn’t. In fact, the medieval music that marked the original quartet is almost completely absent, here replaced by choir and orchestra (the London Symphony Orchestra, no less!) and lots of suitable space-rock sounds.

Fresh Aire V indulges Chip Davis’ interests in writing classical music and scoring soundtracks. At least, that’s how I’ve always heard it, since my takeaway is usually “Why didn’t more people try to hire Chip Davis to write soundtrack music after this?” Earth Rise, for example, sounds like it could have stepped from the film, 2001: A Space Odyssey. Elsewhere, Rick Wakeman and The Alan Parsons Project are the obvious reference points, while Z-Row Gravity sounds like German electronic space music.

Originally, I felt Davis went too far afield in making space music. These days, I can’t help but appreciate how well he pulls off the classical/pop hybrid. Opening with a Gregorian chant (Lumen), flowing into symphonic rock, breaking it up in the middle with some genuine space spelunkering… it’s a risky move in many ways for a group whose work had become, frankly, formulaic. I wouldn’t say the sum result is better than the first four albums, but it’s appreciably different. That I didn’t originally appreciate the difference speaks more to my lack of imagination than Mannheim Steamroller’s.

Davis liked the idea enough to revisit storytelling with an album based on Greek mythology, Fresh Aire VI, again featuring the Cambridge Singers and London Symphony Orchestra. Generally, I enjoy these albums more than the “natural” works that appeared between them (Saving the Wildlife, Yellowstone), as the literary works tend to fall more in the progressive camp, while nature is more frequently aligned with new age. That said, why you would pay any attention to the opinion of someone who can’t even make up their own mind is beyond me.

Released on elpee, cassette and compact disc on November 1, 1983 in the US (American Gramaphone, AG/AGC/AGCD-385) with gatefold cover. Reached #25 on the US New Age charts in 1994.