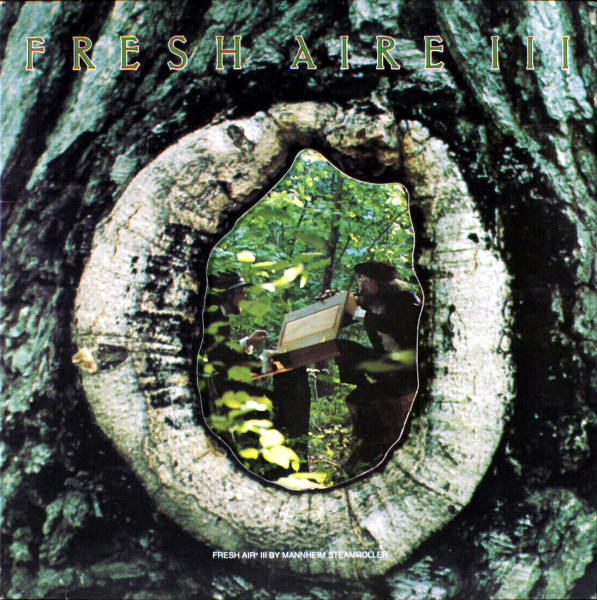 Their third is their most charming, a symphony of strings and insects’ wings.

Kronomyth 3.0: Three is a magic lumber.

This is my favorite of the first four “seasonal” works from Mannheim Steamroller. Beginning with the lively and lovely Toccata, Fresh Aire III is an assortment of chocolate-covered mind candy that never hits a sour note as it strolls through the band’s unique brand of baroque & roll. Despite the subtitle of “Summer” that appeared on compact disc reissues of the album, I’ve always aligned this with Autumn, as the band’s third album does a remarkable job of capturing that season’s mix of sweetness and decay.

The string sections from the Kansas City and Omaha Symphonies return for several songs, including Small Wooden Bachses (the band’s penchant for puns is an extra source of delight) and the melancholy Amber. Mere Image is a playful twist on the familiar “Greensleeves” that shows off Chip Davis’ skill as both an arranger and a recorder player. If I were compiling a Best of Fresh Aire album, I might well end up with these first four tracks at the end of my pruning.

The second side is subtitled “The Woods Is Alive” and features natural sounds of birds and insects in the background of every song. Morning reminds me of Penguin Café Orchestra and Pat Metheny; a bit bubbly for my tastes, but appreciably tuneful. Interlude 6 continues the trend of thoughtful solo piano pieces; the label even released them all together on an album in 1981. The Cricket is a mad march that concedes nothing to Rick Wakeman in the craziness department; it remains one of my favorite Mannheim Steamroller tracks. Davis then completely shifts moods for The Sky, an ambient jazz song that has more in common with early Weather Report than Mannheim Steamroller. The spirit of Wakeman returns for Midnight on a Full Moon, a rousing closer that proves you don’t need a full orchestra to fill a room with sound.

In the advent of compact disc technology, listening to this album was like walking through a magical woods. The silence between tracks brought with it a palpable chill and the sounds penetrated the air with the crispness and stillness of a cold Autumn night. These days, of course, jaded ears are just as likely to hear this as muzak from a bygone era, but at the time it was bracing stuff, and even now it never fails to transport me back to a time of musical wonder.

Written and arranged by Chip Davis.

Released on elpee and cassette in 1979 in the US (American Gramaphone, AG/AGC-365) with diecut gatefold cover.