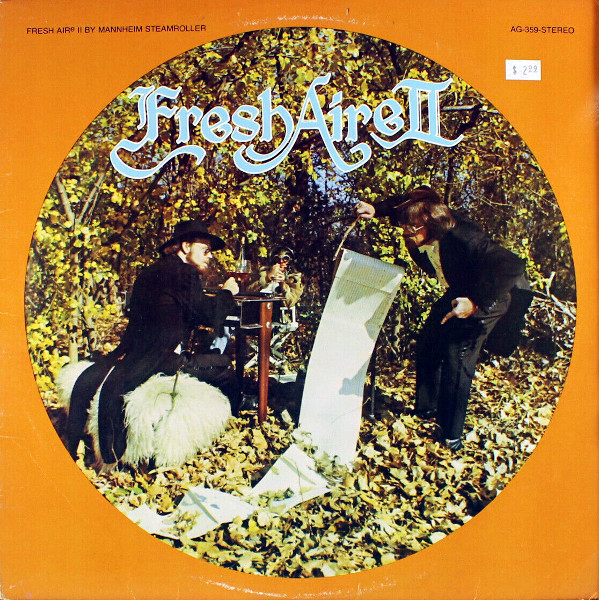 A medieval romp mixed with melodic new age from the heady days of audiophilia.

Kronomyth 2.0: Songs from the woods.

The second album from Mannheim Steamroller, Fresh Aire II, brings their medieval interests to the fore on the side-long Fantasia, which features the lute, recorders and strings mixed with liberal amounts of synthesizers and drums. The result feels like a muzakal interpretation of Rick Wakeman’s Six Wives or Jethro Tull’s Songs from the Wood. (Gentle Giant is another reference point, for those who remember “Talybont” from Free Hand.) Piece for piece, “Fantasia” may be the band’s crowning achievement, presenting different variations on a musical theme through a series of “doors.”

The second side is a continuation of the first Fresh Aire including another new age Interlude, an interlute (Toota Lute) and what might be their most memorable melody yet in Going to Another Place. The music’s dynamic range, engaging palette of sounds and inoffensive nature made it another natural choice for high-end audio equipment demos. Sitting in a darkened room with a pair of Klipsch speakers and Mannheim Steamroller was a sensory revelation if not a religious experience. When compact disc players arrived, American Gramaphone wisely made sure the Fresh Aire back catalog was available on CD.

These days, I’m a bit embarrassed to admit how much I enjoyed the original Fresh Aire albums. The early Windham Hill albums, while simpler, also caught my interest. The new age movement sort of ruined simple instrumental music for me, unless I could justify it as minimalist or experimental. There is, however, a very deep pleasure in hearing songs like “Going to Another Place” and re-entering the different doors after so many years. Maybe it’s the lost innocence of youth, or of the times, or both. This was before the band got swept up in the holiday spirit, when the idea of getting stoned and listening to Mannheim Steamroller was still a reasonable proposition. If you missed this the first time, consider going back in time to check out the first five Fresh Aires.

All songs written and arranged by Chip Davis.