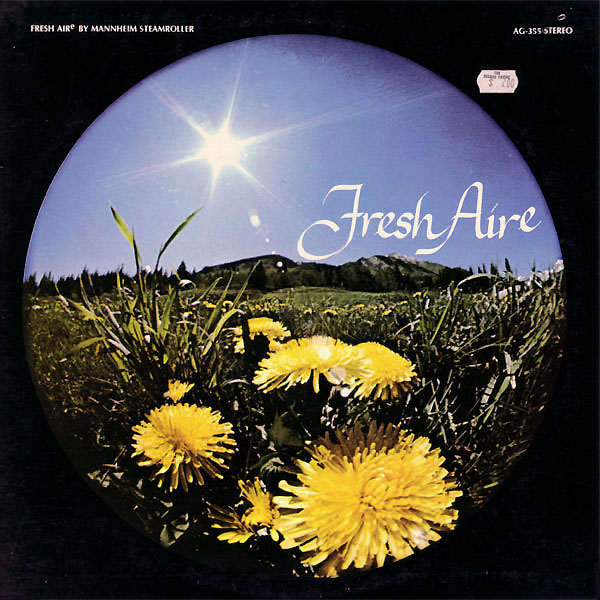 Chip Davis calls it 18th century rock and roll. I call it a breath of fresh air.

By the middle Seventies, English progressive rock had taken root in middle America. It probably had something to do with all that fertile farmland. And so you had bands like Kansas, Styx, Starcastle and Mannheim Steamroller replicating the sound (if not the spirit) of Genesis, Yes and Rick Wakeman.

Mannheim took a different path than all of them, self-releasing instrumental albums on their own American Gramaphone label (a play on the Deutsche Grammophon label). Featuring drums, bass and a host of keyboards (piano, harpsichord, synthesizers), the first Fresh Aire album invites comparison to Rick Wakeman and his English Rock Ensemble. As a composer, Chip Davis is more thoughtful and less flashy than Wakeman, though both share a passion for classical structures and medieval themes.

The poem on the back sleeve aligns the twelve pieces with the life of a raindrop over twelve months. (“I am a raindrop… and you had better stop following me or I’m going to kick your ass,” chortles the troll.) Since the later albums are contained to a single season, this has been called the “Spring” album (it features a cover shot of fields in what could be Springtime), though in fact the songs are mapped to the twelve months of the year.

The album alternates between quieter pieces (there are four Interludes) and bursts of keyboard-driven rock (“Chocolate Fudge,” “Rondo,” “Saras Band”). Instrumental progressive rock isn’t for everyone, but if you enjoyed Rick Wakeman’s White Rock or Camel’s The Snow Goose (and I did), the first Fresh Aire album offers more of the same in a slightly stripped-down setting.

There’s also a review of this on All Music where I reference Sergei Rachmaninoff because I am a pretentious wiener. I gave it three out of five stars then, with the caveat that my mind is confounded by quantification/validation by stars, decimal systems, letter grading, etc. I’ll give it four stars now if it makes anyone feel better.

Written and arranged by Chip Davis.

Released on elpee in 1975 in the US (American Gramaphone, AG-355). RIAA-certified gold record.