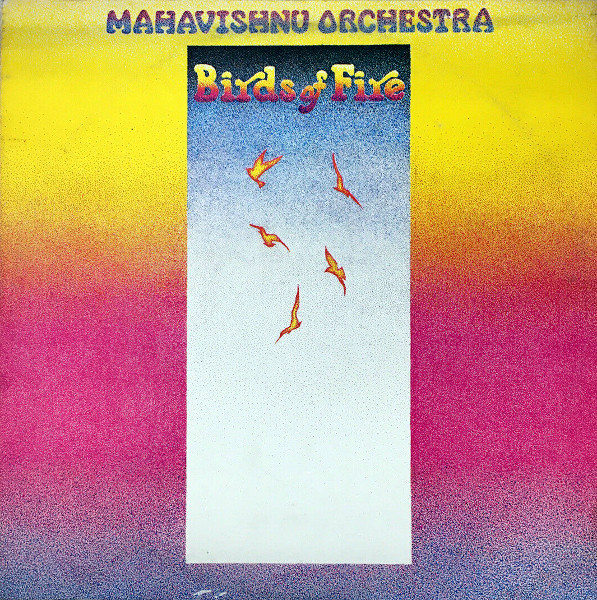 The band takes the intensity of their first album and turns it up to eleven over eight.

This is an album of elevenses, a prime-number example of the irreducible impossibilities of the original Mahavishnu Orchestra. The Inner Mounting Flame was an amazing record, but Birds of Fire rages from the very beginning and rarely lets up in intensity. John McLaughlin’s fiendishly fast playing and strangely articulated arpeggios rend the very fabric of reality as the Orchestra explores alien time signatures at every turn. The result is, if not their best album, then their most breath-taking.

There was, apparently, internal dissension in play. Maybe McLaughlin took too much of the credit. Or maybe the band had too many strong personalities at work within it. A third studio album fell apart, and Birds of Fire became something of a swan song for what was arguably the greatest fusion band of its too-brief time.

“Technically speaking, it took a long time to get into time signatures because of conditioning and also the lack of experience in playing them. I always felt stiff. Someone would say let’s play something in 5/4 or 7, which always gave me a very traumatic, uptight sort of conscious experience. But now it’s becoming natural; it’s becoming like you don’t even count any more. It’s very stimulating. You really learn to love 7’s, 9’s, 11’s, 17’s, 19’s, opening up whole new avenues of ways of playing.” — Rick Laird, as quoted in a 1973 DownBeat article.

The opening Birds of Fire begins with a gong before launching into an all-out sonic assault on the senses. Using what appears to be a 9/8 time signature, and teasing a 4/4 signature in the middle, McLaughlin shreds all expectations of normalcy from the very start. Miles Beyond keeps the crazy time signatures but opts for a much cooler sound that manages to outfunk Weather Report (no easy task). The drumming from Billy Cobham on this album is some of the most supple playing you’ll ever hear. Celestial Terrestrial Commuters returns to the realm of the mathemaniacal, this time with a synth solo from Jan Hammer that sounds, I kid you not, like a computer farting. It’s one of several spots on the album where Hammer’s imagination is a step ahead of the technology. Sapphire Bullets of Pure Love is a snippet from a soundcheck and, yes, I realize it’s pretentious to present random noise as a song. Even less expected is the acoustic trio of Thousand Island Park featuring only McLaughlin, Hammer and Rick Laird. McLaughlin always seems to juxtapose light and dark, and this is handily the album’s lightest moment—just the sort of thing you’d expect Chick Corea to slip into one of his albums. The closing Hope feels like the previous theme re-presented in a more agitated form. It’s also one of those tracks where Allan Holdsworth comes to mind (Birds of Fire may be the best entry point for Holdsworth fans crossing over in McLaugh-land).

The second side starts with the supercharged solo showcase, One Word. On an album where the Mahavishnu Orchestra can create entire worlds in four or five minutes, using ten minutes to basically riff off a groove seems like a waste of time, but that speaks more to the brilliant economy of Birds of Fire than any shortcoming in the album’s longest song. Sanctuary is as calm as its name implies, this time with Hammer emulating a flute sound (poorly) on the synthesizer. Open Country Joy is the album’s most melodic entry. Despite what apparently was a certain unhappiness in the band, Hammer and Jerry Goodman make beautiful music together here. Resolution presents musical tension and resolves it some at the end but not completely, a kind of closing affirmation that not all questions will be answered at the end of this journey.

Birds of Fire is difficult music by design. McLaughlin emerges as a perfect embodiment of yin and yang (different religion, I realize), highly excitable and supremely calm, moving easily between the mathematical and the spiritual as if born to both worlds, a demigod of the guitar. The rest of the orchestra is swept up in this communion with light and dark spirits, lifted to new heights in a very real sense. Maybe it was kismet (and, yes, now I’m just doing it on purpose) that the band should break up quickly. Energies this intense cannot be sustained without something breaking down. But, oh, to have burned so brightly!

All compositions by John McLaughlin.