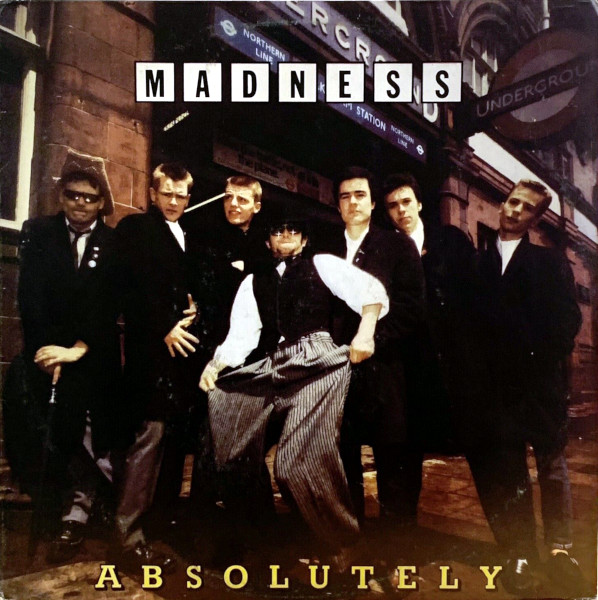 The brilliant followup to the first album, with fourteen more songs from this magnificent seven.

This was the first Madness album I bought and, needless to say, not the last. Absolutely is ridiculously catchy, fourteen tracks of ska-infused rock filled again with helium and good humor that deserves to be played from end to end, repeatedly. At the time, this album and The Specials and, later, Special Beat Service were in heavy rotation on my home stereo. In between, Elvis Costello, XTC and Squeeze filled in the gaps. It was a good time to be a fan of English pop.

The band’s second full-length album gets off to a joyous start with Baggy Trousers, Embarrassment and E.R.N.I.E. On the second side, the run from Shadow of Fear to In the Rain is nearly as much fun. Along the way, the band mixes it up with reggae, rock & roll and tightly-wound arrangements that threaten to snap at any moment. One Step Beyond was a great album, make no mistake, but Absolutely is a step forward in terms of musical development. You’d have to look to Elvis Costello to find so many hooks (and so many words) crammed into two or three minutes of minute.

The album ends, naturally, with a silly lounge instrumental that feels like a two-minute holiday from the banality of reality. As a teenager, Absolutely never failed to put me in a good mood. There’s no outmoded allegiance to Prince Buster here and no indication that the band was running out of ideas. It’s no wonder the band often returned to their childhood for inspiration, since they never seem to have lost that childish wonder that informs the best of music.