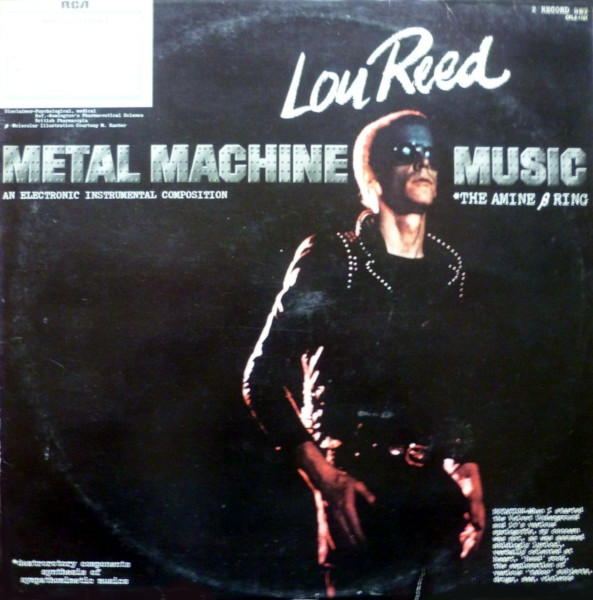 Kronomyth 7.0: The Naked Emperor of Punk

Ugh. So let’s get this out of the way. Metal Machine Music is a complete con job. It’s not art, it wasn’t intended to be art and it certainly isn’t music. It is an hour of noise. Not even different noises, just the same annoying noise blasted into your ears endlessly, mercilessly. There are no discernible instruments, only the harsh, glittering sounds of electronics and feedback. I think I heard some screaming in there too, although that might have been me as I was listening to it.

That positive accounts of this album exist is a testament to the cult following of Lou Reed. I have read otherwise intelligent critics compare this to a kind of musical “Howl,” as an anguished statement hurled against the uncaring walls of the status quo, but no. If Allen Ginsburg had simply typed the word “Howl” one thousand times then, yes, the parallel would hold. Reed himself apparently had the work of La Monte Young in mind with Metal Machine Music, and there was a precedent for this sort of noisemongering in the avant-garde world. If John Cale had released this album, I might be inclined to see it as art, but Lou Reed? He wasn’t some mad scientist of the recording studio, he just liked pushing peoples’ buttons.

It took me several tries before I could listen to Metal Machine Music in a single sitting. Normally, around the tenth or eleventh minute, I start to get a headache and off come the headphones. Note that I don’t get a headache listening to La Monte Young, Terry Riley or even Robert Fripp and Brian Eno, whose No Pussyfooting plied similar sonic space. Those artists had the decency not to beat listeners over the head with the same abstruse obelisk of noise for sixty minutes. Instead, they invited the listener to discover the music in the noise. Metal Machine Music simply invites you to its own funeral, and then spends the next hour painfully dying in sonic self-immolation.

I know, I must be a small-minded man not to recognize the genius of Lou Reed, but I know a pair of balls when I see them and Reed’s are in plain view on this album.

All music composed by Lou Reed.