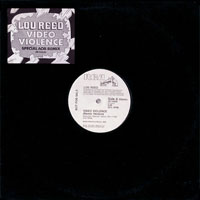 The trouble with Mistrial, most Lou Reed albums really, is the appalling absence of horns. Apparently. So RCA released a Special AOR Remix (which one hopes is a tongue-in-cheek dig at AOR’s unwillingness to play the kickass album version) with horns in place of the droning dual-guitar attack. “Video Violence” in any form is still one of the best things about Mistrial. The acerbic wit is classic Reed, captured perfectly in his dead, droll reading of the words “exotic panties.” Somehow (perhaps mercifully), Lou Reed discs have dodged the remastered, expanded treatment, so the remix of “Video Violence” could be lost to the dust of time. Collectors will have interest in this version, but the rest of the world probably doesn’t need to tune into Mistrial, let alone a pretty-pig-in-lipstick remix of its wildest hog.