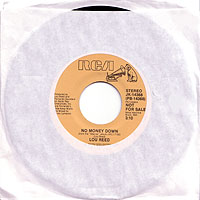 Not a particularly strong case for purchasing Mistrial, just a walk through the mild side of Reed’s rock & roll muse. The 7-inch includes “Don’t Hurt A Woman” from the same album (honestly, the better track), while a 12-inch printed includes extended and dub versions of “No Money Down.” FYI, the version is the same as the elpee unless noted below. There’s also a 12-inch promo version printed on green vinyl (the color of money, get it?).