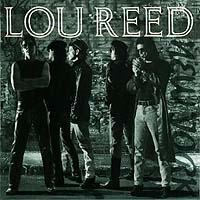 City, sanctuary, asylum, inspiration… New York City has been all these things and more to Lou Reed over the years. Some folks have Aphrodite or Diana for a muse; Lou has the Statue of Liberty. Reed took a couple of years off after the mediocre Mistrial, a second honeymoon of sorts where the spark might be rekindled, and returned with his most lucid, funny, honest and inspired album ever: New York. In many ways, this album articulates what Reed has been trying to say all along. “Romeo Had Juliette” was played out earlier on Legendary Hearts; add some of Street Hassle’s realism and Reed bests both albums in a single stroke. Elsewhere he revisits old haunts like “Men of Good Fortune” (“Strawman”), “My Old Man” (“Dirty Blvd.”) and “Video Violence” (“Busload of Faith”), drawing the marrow of their meaning out. New York’s achievement is not that Reed is doing anything different; he’s doing the same thing he’s always done, but better than he’s ever done it before. The remark is often made that Lou Reed is an urban poet, but that’s not it. He’s an urban polyglot, fluent in the languages of the city’s pseudo-intellectuals and its survivors; a mosquito that draws blood from commoner and king alike; the patron saint of the downtrodden and their fellow penitent as well. His earlier accounts were delivered in the ecstatic throes of youthful abandon, then scared survival, degradation, rehabilitation and finally bemusement. What transpired between Mistrial and New York was a kind of hosing off of Reed’s artistic ideals; he didn’t run away from making the great album he was always capable of, but embraced the challenge. New York isn’t merely an album, it’s a love song to a muse who has never abandoned Reed.

All songs written by Lou Reed unless noted.