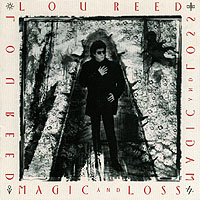 Into each life a little rain must fall. That it takes Lou Reed, dampened messenger of death, fourteen songs to reach the same conclusion squelched those spirits who would have soared to meet Magic And Loss with the same accolades as New York. With a little prudent pruning to remove the dry, dull patches in its midst, Magic And Loss might have been another resounding success. Usually, about the time that “Sword of Damocles” strikes, I’m convinced that this album is arguably better than New York. The two share the same musical sensibilities, and the single “What’s Good” even sounds like a carbon copy of “Dirty Boulevard.” And a bracing balance of the elegiac (“Magician,” “Goodby Mass”) and the invincible (“Power And Glory”) paints a compelling picture of the living and the dead. But the disc never really recovers from the maudlin streak begun with “Goodby Mass.” The songs that follow are dire, often bereft of a melody, desolate places where Reed walks alone. There are some diamonds in this dusty place, notably the haunting and still “Dreamin’,” which suggests what a Lou Reed/Brian Eno collaboration would sound like. It’s a moving song, sung in a faraway voice as if distracted by a waking daydream. When Reed and Mike Rathke create songs like this, where Lou’s marble observations are contrasted with a colorful setting, the results are wonderful. Likewise, when the music and vocals draw from the same tuneless well, or simply seem to be mismatched, the outcome is deadly. If this desert of the senses had been omitted from the middle, songs like “Harry’s Circumcision” (pitch black humor), the cranky “Gassed And Stoked” (which deserved a more passionate reading), and the closing “Magic And Loss” (inviting shades of The Police) might have saved this dark mass from its own noose. Lou Reed deserves credit for staring death in the face for sixty minutes without blinking, but most listeners lack that sort of stamina. It’s possible that Lou overestimated his own appeal this time, confusing recent critical laurels for the hoary crown of wisdom. Or it could be that fourteen songs about death is agonizingly long for anyone not already inured to Mel Gibson’s directorial hand (Braveheart, presumably The Passion of Christ). New York had a streak of salvation in it, a zest for life that superceded its dark surroundings, whereas Magic And Loss succumbs first to mysticism, then fateful resignation. This recording may have been cathartic for Lou Reed, but audiences will find him better company strolling the streets of New York than on this bedside vigil.