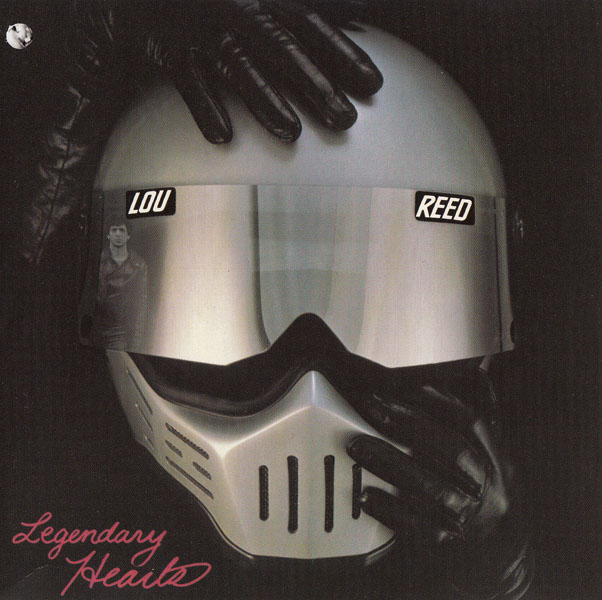 Before Romeo had Juliette, we had this album from Lou Reed: funny, romantic, tragic and befitting a legend.

The line on Legendary Hearts (and The Blue Mask before it) is that Lou Reed was now back from the dead, still bored with life, lifted on the shoulders of good musicians and elevated to the status of president of the deadpan poet’s society once more, only this time with a small hearth burning next to his burned-out heart. It’s a good album, better than most of his Arista releases anyway, but Lou Reed always seems to be in a state of death and resurrection. Just when you think he’s played out his hand (Metal Machine Music, Rock And Roll Heart, Mistrial), he springs back from the dead like Dracula (Coney Island Baby, Street Hassle, New York).

Through all the peaks and valleys, Reed has done what he’s always done: write dark narratives that contrast his cracking voice and grating guitars with moments of disarming innocence. With a crack band and a get-in, get-out aesthetic, Reed delivers his amusing observations in deceptively simple packaging: “Martial Law,” “Don’t Talk To Me About Work,” “Pow Wow.” Lurking in the shadow of Hearts is a miniature production of Romeo and Juliet, from the opening “Legendary Hearts” to a pair of tracks that deal first with the father blocking the courtship of his daughter (“Betrayed”) and the suitor’s subsequent Jimmy Dean reaction (“Bottoming Out”). The album ends on a hopeful note, “Rooftop Garden,” that suggests the two lovers get together in the end.

What separates Hearts from, say, Growing Up In Public isn’t the material but the musicians; the dual-guitar dialogue from Reed and Quine* and spare but supple accompaniment from Saunders and Maher create a deceptively simple sound that yields new discoveries with each listen. (*Quine later complained that he had been almost completely mixed off the album, so who knows what I was listening to.) Legendary Hearts doesn’t elevate the legend like a Transformer, Berlin or even a Street Hassle, but it’s a fine middle-of-the-road Lou Reed record.

In a 1997 interview, Robert Quine said of Legendary Hearts: “It could have been a pretty good album. It wasn’t going to be as good as the last one: the songs weren’t as good. The atmosphere was really uptight—it’s impossible to be friends with him. When I got the final mix, I was really freaked out. He pretty much mixed me off the record. I was in Ohio and took it out in the driveway and smashed the tape into pieces. I didn’t talk to him for a month but he knew what he’d done. I have cassettes of the rough mix of the record and it was a really good record but he made it all muddy and murky.”