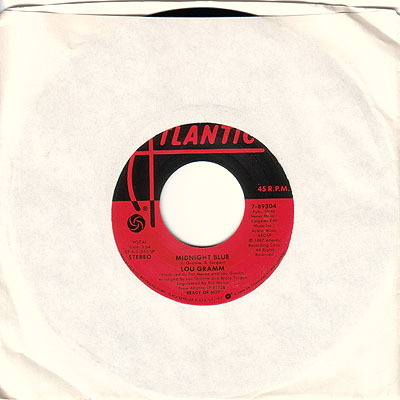 Another one of those “rock singer scores big with a solo ballad” moments that made the 80s so, um, memorable.

Life is either cherry red or midnight blue. Or a series of unconnected and meaningless events that we rationalize after the fact and file away into neat little folders like DESTINY and DESIRE. In 1987, turning on the rock dial was a little like touching a hot stove; it could be something cool or (yee-ouch!) something like “Midnight Blue.” This song sucks the great ambivalent balzac in the sky for any number of reasons (crappy drum beat, talking during your own song, howling for love like Bryan Adams after a shot of tequila). Most distressing is the message. What starts out as a song about a young man claiming his own independence (okay, I’m with you so far) devolves into the usual “Baby, I’m a bad boy but you’re the one good thing in my life and I’ll love you forever” panty-loosening piffle. If you’ve ever been in a relationship where this was “your song,” go directly to jail, do not pass Go, and for heaven’s sake take off those cherry red glasses (even if it was the best four minutes of your life). The B side is “Chain of Love,” also from Lou’s debut effort, Ready Or Not. Neither song differs from its elpee version, since you can’t edit per-fec (cough).