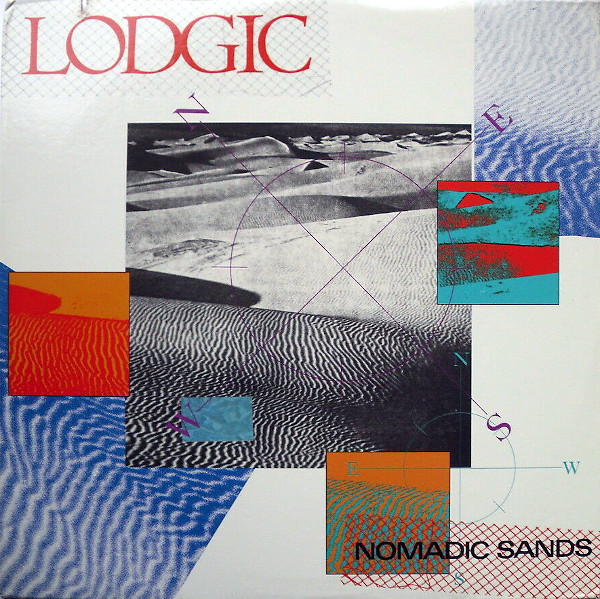 The band’s debut (and swan song) sounds like a cross between Yes, Asia and Toto—paths that in fact were to cross soon after.

As prog bands embraced modern technology (Yes, Rush, Kansas), the line between prog and modern rock blurred. Lodgic’s one and only album, Nomadic Sands, holds the line between the two. Produced by Toto’s David Paich and Steve Porcaro, the bands have some striking similarities, from the presence of two keyboard players (Mike Sherwood, Guy Allison) to the intoxicating, melodic, precise music. Although the band broke up after one album, Billy Sherwood and Allison would take the experiment in a proggier direction with World Trade.

I initially toyed with doing a track-by-track review of this album, but Nomadic Sands is so consistent that it seems an unnecessary exercise. If you can imagine Yes (in the 80s), Asia and Toto delivered by a hungry, young band, that’s what the entire album sounds like. Lodgic is remarkably tight, which probably has a lot to do with the airtight studio production. The vocal harmonies, electronic keyboard patterns (Allison is credited with “keyboard systems”), synthesized-sounding bass and tastefully placed lead guitar all point forward to the future sound of Yes and Asia. In fact, the Sherwoods, Jimmy Haun and Steve Porcaro would all contribute to Yes’ Union a few years later.

If I were to direct you to the best parts of Nomadic Sands, I would probably start with Red Light (a dead ringer for Big Generator-era Yes) and Push So Hard. There isn’t a song on here, however, that gets anything less than top-notch treatment, from the sophisticated keyboard sounds to the carefully coiffed vocals. Billy Sherwood has always shown a gift for melodic, modern rock with proggish overtones, a gift he apparently shares with his early Lodgic family. It probably has something to do with their teenage interest in the music of Yes and Frank Zappa, combined with the allure of modern studio technology and a keen sense of melody.

As to whether or not this qualifies as prog, well, who cares? Was Invisible Touch a prog album or Hold Your Fire? And as for calling this album-oriented rock (AOR), wasn’t that the very definition of prog? A better label might be AMR: ambitious, melodic rock. The band presents some challenging rhythms and structures while never straying too far from a big, melodic chorus or layers of smooth harmonies. There are times when it reminds me of Toto (Nomadic Sands), XTC (In the Cards) and even Michael Jackson. If that last comparison sounds crazy, consider that Jackson actually recorded a song written by Michael Sherwood and Steve Porcaro, “For All Time,” when making the album Thriller. (It was later included on the album, Thriller 25).

The fact that Nomadic Sands didn’t generate more attention was criminal. I mean, Big Generator was nominated for a Grammy, and that wasn’t that much better than this. It wasn’t all for naught, however. The group did score an opening tour slot for Supertramp and its members went on to successful studio careers, with Billy Sherwood eventually joining Yes and, later, Asia. Maybe Lodgic knew they were destined for a nomadic career in music when they started out, in which case the members of Toto were perfect mentors. The sands of time quickly buried their debut, but it’s well worth digging for if you’ve ever found yourself championing an album like Union or Aqua.