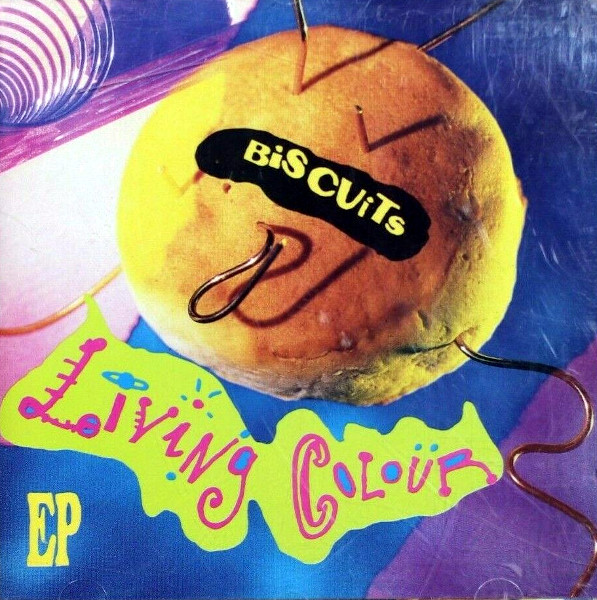 As odds-and-sods albums go, Biscuits beats the puddin’ out of Coda.

Kronomyth 3.5: If it don’t bounce back, you go hungry.

I remember listening to the Biscuits EP when it first came out. It was hours before the Lollapalooza show (the first tour) in New Jersey, and Living Colour was on the bill along with Jane’s Addiction, Ice-T, Rollins Band and some other groups (Siouxsie was a no-show). We were hanging out getting ready for the show and Biscuits was the perfect thing to whet our appetites.

Years later, I picked up the full-length Japanese release of Biscuits, which is basically the EP made into a meal. On the full-length disc, the band wears its variegated rock affections on its sleeve: Jimi Hendrix, James Brown, Talking Heads, Bad Brains, Pere Ubu, The Clash, Led Zeppelin. Eclectic even by my standards, Biscuits illustrated exactly why Living Colour defied easy categorization. The only common thread was awesomeness, which runs through Biscuits as well.

The full-length version reprises the six tracks from the EP plus a bunch of live tracks and a neat remix of Love Rears Its Ugly Head. The EP featured one new original, Money Talks, plus inspired covers of JB’s Talkin’ Loud and Sayin’ Nothing and Hendrix’ Burning of the Midnight Lamp. Those three tracks are worth the price alone and would make my list for a Best of Living Colour. Also included is a bluesy cover of Al Green’s Love and Happiness that has a good flow to it. The two live tracks from the EP, Desperate People and Memories Can’t Wait, are even better than you remember.

The remaining live tracks are a showcase for an incredibly talented quartet and one of the most inexhaustibly inventive lead guitarists of all time, Vernon Reid. Corey Glover also deserves a lot of credit for singing his heart out on every song, whether it’s by Bad Brains (Sailin’ On) or Pere Ubu (Final Solution). Given that the band never released an official live album in the 20th century, Biscuits is as close as you’ll get. Any closer and, honestly, you’d probably catch fire from the heat.

At the time of Lollapalooza, Living Colour was the one band I wanted to hear the most. After all, after hearing Biscuits, how couldn’t you be hungry for more?