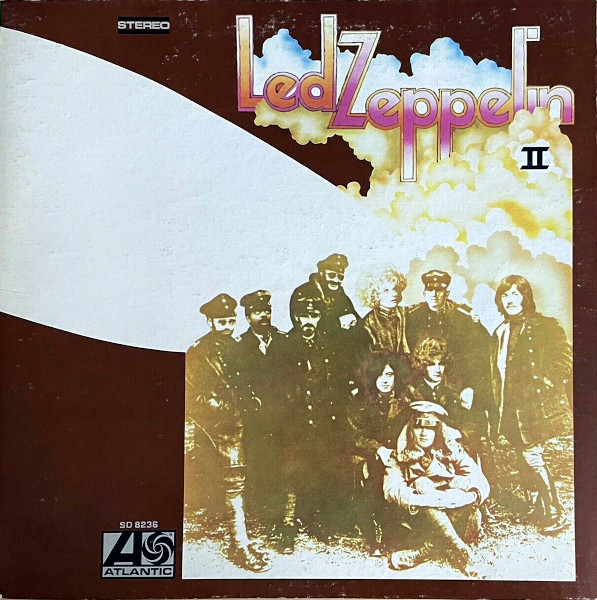 The band’s second album manages to be both lighter and heavier than their first. And also, magnificenter.

The disappointing followup to their debut finds Led Zeppelin recycling old blues songs and mixing in a couple of weak acoustic folkie tunes from Robert Plant. Just kidding. Led Zeppelin II is even more magnificent than their first album. If the group had indeed made a deal with the devil to be the world’s greatest rock & roll band, Old Nick had held up his side of the bargain.

The whole thing kicks off with Whole Lotta Love, an orgasm of the senses that takes the psychedelic blues-rock of Cream to a whole new level. The band turns their amps down from eleven for the next track, What Is and What Should Never Be, at least for a minute, and the dichotomy sets the stage for an album that alternates perfectly between brimstone fury and a cool breeze. The Lemon Song is blues-infused, sexual rock n’ roll with Jimmy Page’s guitar and Robert Plant’s vocals engaged in the musical equivalent of a heated threesome. Side one closes with an acoustic love song from Plant, Thank You, this time prominently featuring John Paul Jones’ organ.

Heartbreaker hits the reset button with another brilliant heartstopper that deserves its own pedestal in the heavy metal hall of fame. Living Loving Maid, while not one of the band’s favorites, is one of mine, since I like irregular rhythms and catchy melodies. Ramble On is even better, starting out as an acoustic song before exploding into maximum rock and roll. (The acoustic/electric split-song is its own subgenre, which would include “Over the Hills and Far Away,” Rush’s “The End,” Gentle Giant’s “I Lost My Head” and a host of other magical moments.) Moby Dick is a mighty riff-driven instrumental featuring a John Bonham drum solo, and the album closes with an electrifying perversion of Willie Dixon, Bring It On Home.

Led Zeppelin II is a high-water mark in the legend of heavy metal, yet it also introduces acoustic elements and fantasy-fueled subjects (e.g., “Ramble On”) into the Zeppelin’s journey. That the band never released a bad album is an avowed fact (excepting perhaps The Song Remains the Same, which never excited me as an audio-only experience). As for choosing their best albums, it usually comes down to this, Zoso, Houses of the Holy and Physical Graffiti, which has led to more than one nonsensical list of “best Led Zeppelin albums.” Seriously, the only Led Zeppelin list you should have is a list of Zep albums you don’t already own, which would probably just include The Song Remains the Same and Coda. And, yes, you should really think about buying those albums too.