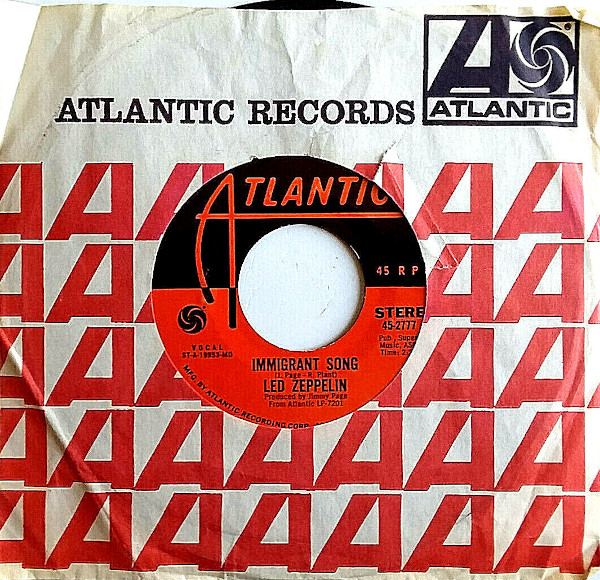 The song that takes the idea of a British Invasion to a whole new level.

Led Zeppelin had already taken the world by storm with their first two albums. Led Zeppelin III made plain that the band wouldn’t be taking prisoners. Immigrant Song makes The Ride of the Valkyries sound like a bicycle stroll. John Paul Jones’ relentless bass and John Bonham’s drumming herald the invading army, while Robert Plants howls overhead and Jimmy Page conjures dark clouds of magic from his guitar. Where their earlier music was frighteningly good, this song was just terrifying. Amazing to think it all takes place in less than two and a half minutes.

The B side is the antithesis of sturm und drang. Hey, Hey, What Can I Do is an insanely catchy acoustic number about a promiscuous lady sung from the vantage point of her cuckolded man. Was there ever a band that could run as hot and cool as Led Zeppelin? Although credited to Led Zeppelin III on some pressings, “Hey, Hey, What Cam I Do” didn’t appear on any Led Zeppelin album until the 1990 box set, making the single something of a collectible in its day. Fortunately, radio stations gave the B side frequent air time in the 70s.

Promotional Japanese 7-inch single version
A1. Immigrant Song
B1. Out on the Tiles