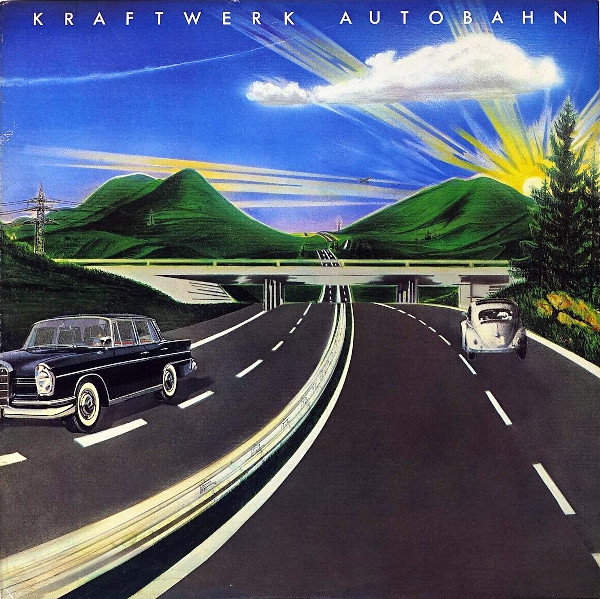 Ralf Hütter and Florian Schneider expanded Kraftwerk to a quartet and released their groundbreaking fourth album, Autobahn. The title track is a 22-minute electronic opus that transplants the American automotive love affair of The Beach Boys onto Germany’s famed speedway and into the computer age. The line “Wir fahren, fahren, fahren auf der Autobahn” immediately recalls The Beach Boys “Fun, Fun, Fun” and creates a mental image of robots enjoying the same kind of joyful communion with their car on a sunny afternoon with the top down. From here on, it was clear that Kraftwerk was going places, and Autobahn became an international hit.

Autobahn isn’t the album’s only achievement, however. Kraftwerk anticipates the gothic synthesizer rock to come on Kometenmelodie 1 and Mitternacht, while Kometenmelodie 2 explodes in orgasmic, melodic computer jubilation. The closing Morning Walk trades its stick shift for a walking stick as the robots register the sounds of birds, insects and babbling brooks. Ralf and Florian had experimented with these sounds before, but Autobahn presents them in prettier parcels.

The contributions of Klaus Roeder, who left after this album, and Wolfgang Flur are those of supporting players. Roeder’s presence is most keenly felt on Mitternacht, and I wouldn’t say there’s more or more complex percussion on Autobahn than Kraftwerk albums past. What Ralf and Florian have done here is taken the electronic experiments of the past and applied those discoveries to a concrete concept that could be more easily consumed by the average music listener. No doubt, Autobahn awakened many creative ears to the pop possibilities of electronic music, from David Bowie to Ultravox. It remains a classic in the annals of electronic music and is an album I still enjoy taking for a spin.

All songs written by Ralf Hütter and Florian Schneider.