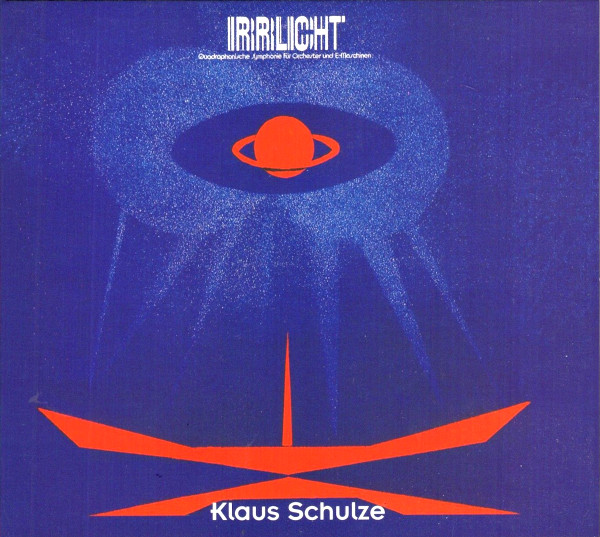 The first in a musical odyssey of electronic soundscapes and sculptures that combines equal parts art and artifice.

Klaus Schulze’s first solo album is billed as a “quadraphonic symphony for orchestra and e-machines.” To paraphrase a very famous movie, you had me at quadraphonic. Interestingly, the orchestra is in fact just manipulated tapes of an orchestra rehearsal, which places this album firmly in the musique concrète camp. (Things look so much cooler in italics, don’t they?) And the e-machines are actual electronic devices and not some secret code word for a synthesizer. So, in summary, this is an album of manipulated orchestra tapes and electronic devices, which is a recipe for awesome.

The album opens with Ebene, roughly translated as a plane or a level surface. It begins with muffled orchestral sounds through manipulated tapes that are soon joined with the drone of an electric organ. That’s not the most evocative description, so let me try to explain what that sounds like. Imagine a giant computer dreaming out loud in an empty cathedral, and you sort of have an idea. I’ve heard Tangerine Dream’s Electronic Meditation, and “Ebene” is on a whole other level. (I know, I only amuse myself.) TD clawed at the cosmos with musical instruments. Schulze lets the cosmos flow through him like an electrical current. “Ebene” ends abruptly with a kind of cosmic toilet flush (I kid you not) and the listener is quickly swept into the alien, electronic world of Gewitter (“thunderstorm”). Here, Schulze creates some truly out-of-this-world space music that serves as a brief but captivating science-fiction soundscape.

Exil Sils Maria is another large block of electronic musique concrète. Upon hearing the piece played backwards, Schulze decided to keep it that way, and so the entre trip feels like a going backwards in time or tunneling through time as sounds pass by in doppler decay. It’s a neat effect, but is it music? I’d be more inclined to call it audio art, while admitting that I feel a bit silly listening to a reverse audio recording for twenty minutes and trying to make sense out of it. In a sense, Irrlicht exposes the double-edge sword of Klaus Schulze’s music: sometimes it sounds like postmodern classical reconstructivism and sometimes it sounds like thirty minutes of amplifier feedback. For me, understanding intent is critical to appreciating art; otherwise, I’m just staring at a giant metal doughnut or whatever.

Thus we arrive at the end of Irrlicht and, with it, the realization that Klaus Schulze is both a sculptor of sounds and space-rock confectioner. A whole army of albums would follow, some better, some worse, most of them consisting of massive sculptures of electronic sound. That these works are broadly interrelated is underscored by the fact that the labels felt comfortable tacking on a performance from 1976, Dungeon, to the end of this album as a bonus track. It shows an advancement in terms of the electronics used, but otherwise continues in the style of Schulze’s slowly shifting electronic idiom.