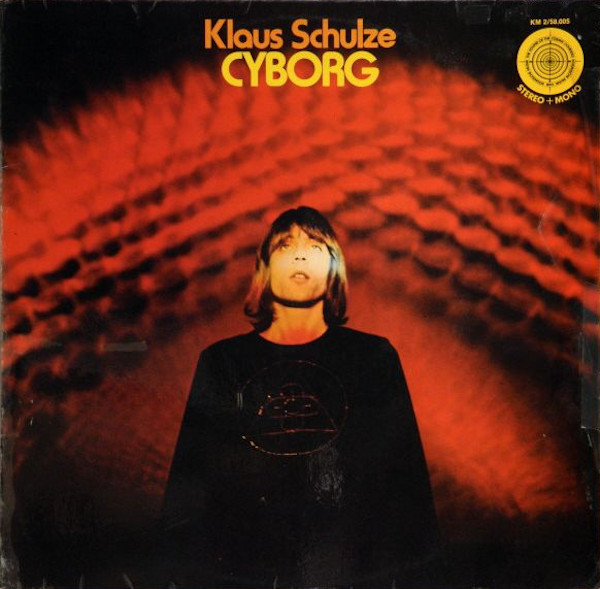 This is a longer, ninety-minute odyssey into the strange musical world of Klaus Schulze as first unveiled on Irrlicht. Electrical sounds, synthesizers and manipulated recordings of classical instruments (cello, violin) combine to create chamber music for the electronic age, divided into four side-long works that each balance the equation differently. On Synphära, the effect is that of a radioactive church mass for a post-apocalyptic world. On Conphära, the listener rides on a pulsing stream of electricity while strange shapes pass as though glimpsed through the window of a fast-traveling train. Throughout, Schulze sculpts the sound, divining the musical essence from the electrical flow.

You might have dismissed Irrlicht as the happy accident of a lucky experimentalist who had stumbled upon a new lexicon of sound. Cyborg both replicates and refines the experiment, making it plain that Schulze was in control and comfortable in the role of creator. The resulting sound-sculptures are works of art, in my opinion. Now, one man’s sound-sculpture is another man’s noise, so an appreciation of Schulze is highly subjective, yet I find listening to his early works as satisfying as strolling through a sculpture garden.

One complaint I do have with Schulze’s music is that is seems to be poorly curated and annotated. For example, some copies of Cyborg transpose the pieces “Synphära” and Chromengel. This kind of lazy mistake feeds the idea that Schulze’s music is interchangeable. The two compositions are in fact very different. “Synphära” is primarily an organ/synthesizer piece with electrical/electronic accompaniment, “Chromengel” its inverse, a composition where the music is stillborn through radically slowed-down tapes, only to usher the listener into a mechanical birdworld of exquisite beauty. Or something like that. Schulze’s music is impressionistic for me, and putting it into words often results in unsightly, purple prose.

The closing Neuronengesang brings the manipulated sounds and electronics together into an organic equilibrium that reminds me of Brian Eno’s later ambient works. I always find it interesting that listeners have little trouble according the non-musician Eno the title of musical genius yet insist on pointing out that Schulze was merely the drummer in Tangerine Dream prior to his solo career, as though an interest in percussion precludes anything other than whacking objects with a stick.

Looking back over a long career, the idea of a cyborg may suit Schulze best. He is the enigmatic man-machine, singing in a new language of electronics, the classical conductor of electricity taming resistors and capacitors through an elaborate series of knobs, buttons and switches rather than a baton. Yet sounds are only sounds, and words are only words, the tiny footfall of mice skittering through the walls of sleep, gnawing on our intellect.