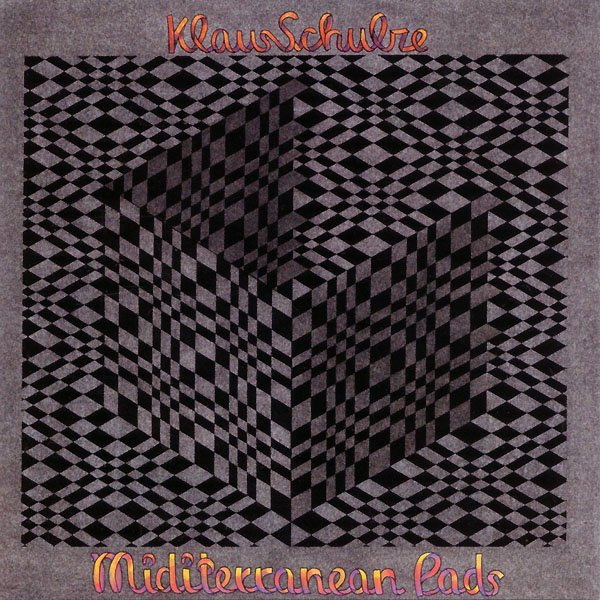 Two long musical journeys over ever-shifting deserts of sound with an Oriental oasis in between.

Two long musical caravans that last nearly an hour, separated by an oasis of Oriental otherworld. Decent Changes is a journey across shifting sands; I’m always startled afresh at how quickly I lose my footing in the music, but Father Klaus takes care to synthesize new terra firma for our feet. Percussion Planante is similar in scope, sound and effect, without the abrupt changes and with a funkier vibe.

Although Klaus Schulze long since gave up the drums in favor of synthesizers, his sense of rhythm has always remained strong. Here, it’s his kaleidoscopic vision of percussion–mixing, changing and creating new patterns from various percussive sounds–that shapes the music. It’s an unconventional approach to rhythm that, over time, becomes less a point of distraction and more a point of discovery, so that Schulze may be said to have a rhythmic language unique to himself.

Behind, between, around the percussion is a mirage of voices, strings and piano that mixes the European stateliness of classical synthesizer music with Middle Eastern mystery. I pointed out earlier in an AMG review that Miditerranean Pads is a taxing listen, and I still stand by that (the rest of the review I gladly abandon as mediocre). My personal recommendation of it (and I do recommend it) is predicated on a patient and attentive listener who would follow Schulze through his constantly-shifting soundscapes. I’ve never listened to it without looking at my watch, but I keep coming back to it, if that tells you anything.

The title track is Oriental in tone, ghostly in form, a mix of soprano voice and synthesizers that falls like a soft rain between two halves of a hot journey. (To my embarrassment on several levels, I referred to “Decent Changes” as a “lush musical landscape” on the aforementioned review, which I suspect is the result of lazy writing and letting the music breathe in a space through speakers versus hermetic headphones.)

All titles composed and arranged by Klaus Schulze.