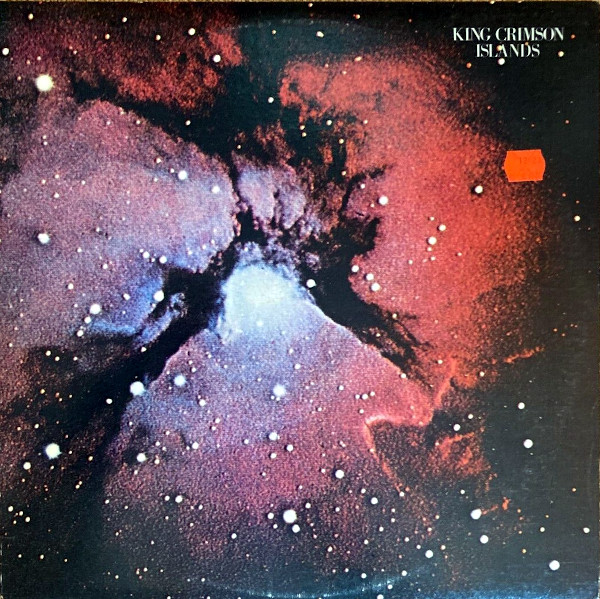 The band’s fourth album is their noisiest, jazziest and darkest album to date. Islands boils down to quasi-classical/jazz plasma orbiting around the creative forces of Peter Sinfield and Robert Fripp. King Crimson had been completely overhauled in the wake of Centipede, an orchestral jazz collective led by pianist Keith Tippett and produced by Fripp. Boz Burrell, Tippett, Mark Charig and Harry Miller had appeared on Centipede’s Septober Energy along with most of Soft Machine, and that energy carried over to King Crimson’s fourth album. As such, it’s an anomaly in the Crimson catalog, although each of the band’s first four albums had its distinctive personality and lineup changes.

The opening Formentera Lady feels loosely structured and, as I’ve noted earlier, gives the impression of a listing ship. The instruments never quite fit together but seem to exist in their own space, a problem that plagues the album in general and is likely attributable to both the appearance of piano and saxophone as lead instruments (in lieu of the guitar) and the weakness of the current rhythm section. Burrell has a lovely voice, a sort of cross between Greg Lake and Gordon Haskell, that adds a certain genteelness to the music (with the exception of the ribald Ladies of the Road).

Fripp again juxtaposes light and dark elements together, nowhere more effectively than in the transition between “Formentera Lady” and Sailor’s Tale. Yet his handling of the pro tempo orchestra is less assured, leading the music dangerously close to the precipitous rocks of progressive jazz-rock that have sunk so many ambitious musical sailors in the past. That said, there are many things that even a misguided Crimson venture can achieve: moments of blistering fury, soft pockets of artful imagery, a fleeting command of orchestral elements that oozes pretty thoughts. Islands has all of these, while testing the patience of less resolute adventurers with digressions into squalls of saxophone, dissonant clashes and limply handled passages.

There’s no getting around the fact that Islands is artfully conceived, from the unspeakably pretty Prelude: Song of the Gulls to the hushed majesty of Islands. Even The Letters, a dark tale of betrayal, is nothing less than poetry set to elevated music. My only complaint is that Fripp and company seem to have drifted off course into strange waters where words are caught up in the winds of oboes, saxophones, cornets and pianos. An interesting excursion, to be sure, but Larks’ Tongues in Aspic marked a welcome return to what the band does best.

All songs written by Robert Fripp/Peter Sinfield unless noted.