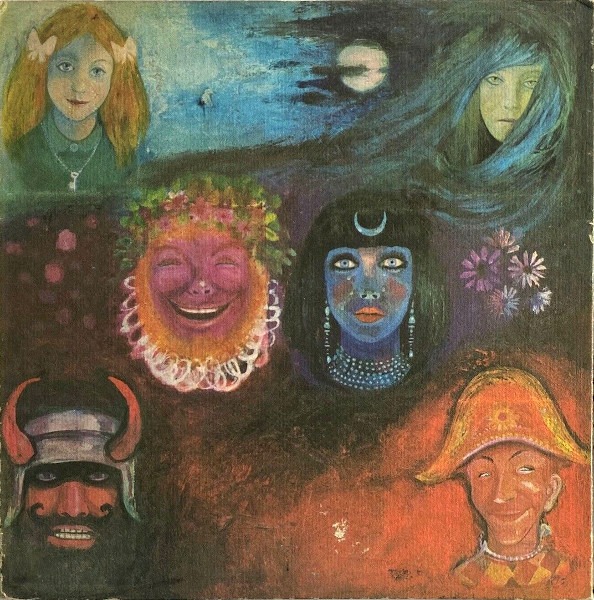 Despite the band breaking apart, Robert Fripp and Peter Sinfield held it together for their sonically stunning second album.

Imperiled on fickle seas suited to the ill moods of Poseidon Stormbringer, steadfast even as Scylla plucked the strongest oarsmen for her own dark designs (Ian McDonald, Greg Lake), our guitar-slinging Odysseus still had the presence of mind to steer his splintering charge safely into port with a second stunning album. That you can hear the lightning strike the mast, feel the upheaval in the tempestuous arrangements separated by sections of tantalizing calm, is to sense the star-crossed King Crimson struggle against the strong pull of Charybdis and succeed.

Amazing to think that, one album earlier, the band began with a halcyon of foreseeably smooth sailing. It was revealed to be merely the eye of the storm, thrusting their second album into a destructive force of unbearable intensity. Listen to The Devil’s Triangle, In the Wake of Poseidon and Pictures of a City and you’ll find yourself in the middle of this musical vortex.

In retrospect, no band could have withstood the fury of this music and survived intact. The albums that followed sailed clear of such dark waters… until Starless And Bible Black. As challenging and harrowing an experience as this is, you may be reluctant to be buffeted and bruised by the crushing magnitude of this Wake. But if “21st Century Schizoid Man” stirred something in your blood that the remainder of Court couldn’t quell, strap yourself to the mast and ride in the wake of Poseidon’s vengeful might.

You’ll find respite in the three Peaces, and fall in love with the siren’s song of Cadence and Cascade, but they’ll be your undoing if you let them lull you into their trap. Also included is Cat Food, selected as the single because it’s in the middle of the two extremes, but not a suitable appetizer for the rough journey ahead. This and Starless are the two harshest entries in the Crimson catalog; if these float your boat, you really need to plug in to Van Der Graaf Generator too.

Songs written by Robert Fripp and Peter Sinfield unless noted.