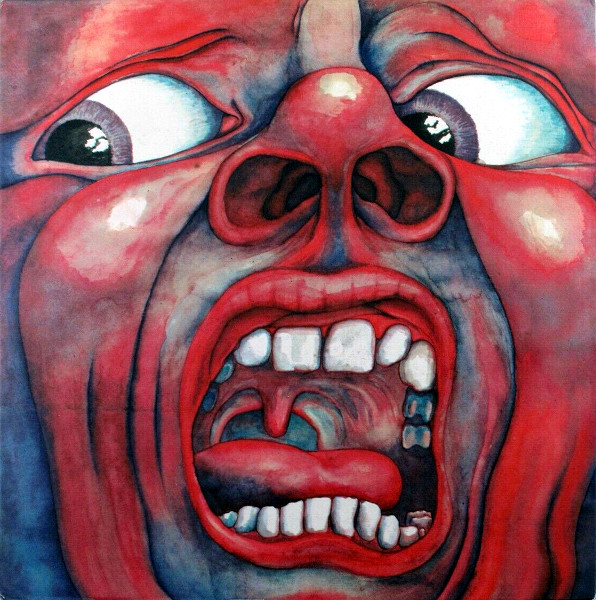 The question of which was the first progressive rock album has many answers: The Piper at the Gates of Dawn, Days of Future Passed, Disraeli Gears, Sgt. Pepper’s Lonely Hearts Club Band, ad infinitum (or at least until the end of 1968). The first perfect example of progressive rock, however, has only one answer: In the Court of the Crimson King. The balance of light and dark, poetry and mellotronic majesty, of towering spires twisting into celestial majesty and mysterious cave explorations on the moons of Mars find their first and truest expression here on King Crimson’s debut album. As a coalescing of what came before (Pink Floyd, Soft Machine, The Moody Blues, The Beatles) and a blueprint for what came after (ELP, Camel, Roxy Music), In the Court of the Crimson King is the logical gateway into the magical realm of progressive rock.

If you’re looking for the earlies blushes of Crimson, you’ll have to look beyond The Cheerful Insanity of Giles, Giles and Fripp to the cheerless insanity of Pink Floyd, the moody indigo of Days of Future Passed and maybe even the strange rumblings of Soft Machine. Those groups hinted at what King Crimson achieves here, from the tripping drums of Robert Wyatt to the mellotrons of Michael Pinder to the strung-out strings of Syd Barrett. King Crimson took these elements and from them painted a masterpiece on the ceiling of the heavens.

21st Century Schizoid Man is nothing less than an ion storm of sound. Saxes squall, drums explode, guitars wail and Greg Lake screams atop it all to be heard. Deep Purple be damned, this is the heaviest opening track I’ve ever heard. I Talk to the Wind is its polar opposite: a pastoral ballad with flute, Lake’s dulcet voice and some of Peter Sinfield’s prettiest lyrics. Epitaph is the epic conclusion to side one and a template for how long-form progressive songs should be structured, including a glorious fadeout.

Moonchild is a Lake ballad of two-and-a-half minutes followed by nine minutes of screwing around, which admittedly would also describe “Interstellar Overdrive” in my book, so you can take my opinion with a grain of salt. In the Court of the Crimson King is the album’s crowning achievement, the return of the king first seen on “21st Century Schizoid Man.” The two sections, “The Return of the Firewitch” and “The Dance of the Puppets,” sound the same to me, but it’s over eight minutes of awesomeness any way you slice it.

In retrospect, King Crimson was a supergroup in the making, but an unstable one at that. The various players would soon splinter in different directions, and Robert Fripp would somehow manage to always find the right pieces to replace them. Thus, all the King Crimson albums are different, and many of them are brilliant, but none of them shine brighter than their first.