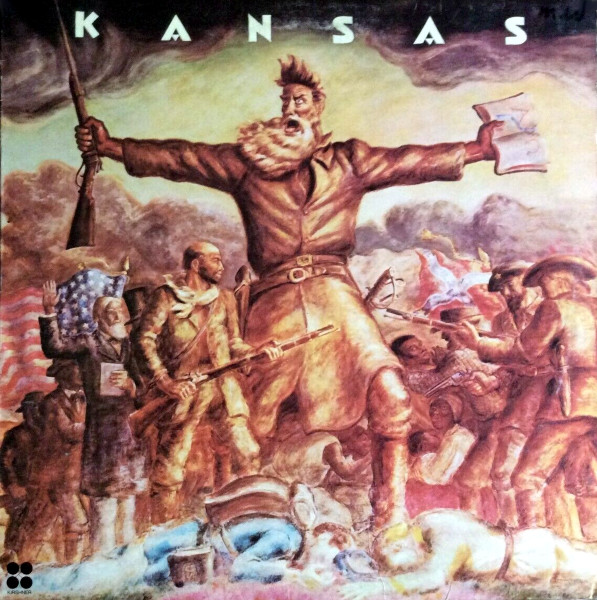 Add to the second wave of prog superstars Kansas, who make a name for themselves on this album.

Kansas had paid their dues by the time they were signed to Don Kirshner’s label and released their eponymous first album. The band had been touring in one form or another since 1970, appearing as an opening act for Queen, Mott the Hoople and, in an interesting bit of historical trivia, The Doors for their final show with Jim Morrison. Songwriter Wally Gold, who worked for Kirshner Records, “discovered” the band in 1973 and produced their debut album. The group had little experience in the studio and too little time, Gold was hardly a prog visionary, and what ended up on the first Kansas album was a snapshot of the band’s stageshow, which ranged from hard rock numbers to ten-minute epics. As such, it’s an imperfect portrait of a perfectly serviceable prog band.

Despite what could fairly be described as passages of musical pomp and songs that wouldn’t qualify as prog at all (“Lonely Wind,” a spirited cover of J.J. Cale’s “Bringing It Back”), Kansas is a near classic in the prog rock canon. The opening “Can I Tell You,” which reminds me of Curved Air (another band that prominently featured the violin), and “Journey From Mariabronn” (based on Herman Hesse’s novel, Narcissus and Goldmund) are career keepers. They may not be as famous as “Carry On Wayward Son” or “Dust in the Wind,” but they’re clearly the work of the same band. The remaining prog tracks are effective by degrees; “Aperçu” grows on you over time, and “Belexes” is as good as anything you’ll find on the early Rush albums.

Even slimmed down to a six-piece, Kansas is a bit unwieldy at times. The group lacked a proper lead singer (Steve Walsh and Robbie Steinhardt split the duties) and a true lead guitarist, roles on which most bands pinned their success. Walsh can sound shrill sometimes (“Belexes”), Steinhardt is more suited to Pigpen than prog. Livgren has since gone on record as saying that the studio recordings didn’t do the material justice, and you do get the sense that you’re probably not listening to the best possible version of “The Pilgrimage” and “Death of Mother Nature Suite.” Queen, by contrast, fell into the hands of more sympathetic producers (John Anthony, Roy Thomas Baker).

Leftoverture and Point of Know Return are the flagships of the fleet, but after that you may want to pick up Kansas. I would tell you that “Can I Tell You” and “Journey From Mariabronn” are worth the price alone. The group’s signature sound—bombastic arrangements laced with violin, fleeting passages of sublime proggery and a uniquely American earnestness—is already in place on Kansas. Like fellow countrymen Styx, smoother sailing was on the horizon…