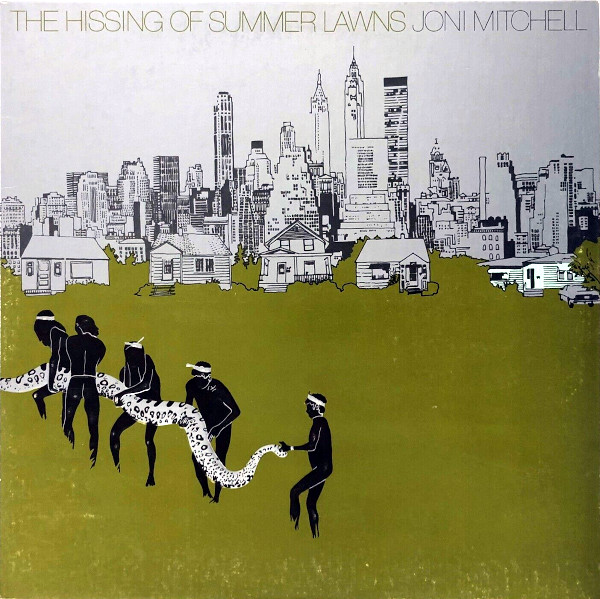 The followup to Court left no doubt as to who the reigning queen of music was.

Kronomyth 8.0: A striped blouse in a clearing by Bazille.

You’ll have to spend a little more time with The Hissing of Summer Lawns than Court and Spark to appreciate it. You won’t mind. At this point, arguing that Joni Mitchell isn’t the greatest musical artist of her day feels futile. Bob Dylan might have been the better poet, Steely Dan more musical, but neither combined the two as well as Joni did.

The album is both a return to the mix of jazz/folk/rock advanced on her last studio album and brave adventures into new sounds, notably The Jungle Line. It’s also one of the few albums from Joni that intersects with other artists. You can, for example, draw a line between Don’t Interrupt the Sorrow and Paul Simon’s Graceland. Or Shadows and Light and Todd Rundgren. Or Harry’s House/Centerpiece and The Mothers (“Brown Shoes Don’t Make It”). Or any number of Steely Dan albums, which now shared many of the same players (Jeff Baxter, Larry Carlton, Wilton Felder, Victor Feldman).

The album opens with In France They Kiss on Main Street, a bald attempt to re-create the success of “Help Me” that is, nonetheless, brilliant. What follows is a blast from the future: primitive and modern synthesized into something you’ve never heard before. “The Jungle Line” is the inspiration for the album cover and will stay with you for years to come. I would have loved for Joni to explore this style more, but butterflies will go where they will. Edith and the Kingpin is nearly perfect in word and music, Don’t Interrupt the Sorry is an inspired portrait of an alcoholic. Shades of Scarlett Conquering is the Gone with the Wind character come to life.

If “The Jungle Line” is the album’s most shocking track, The Boho Dance is its most powerful. Here, Joni Mitchell sums up her place in the world as well as anywhere, noting that she has no place at all but sits between the rich and the bohemian, an outsider uncomfortable in her own clothes. The Hissing of Summer Lawns is beautiful jazz/rock that melts in your mind and serves as a setup for the next track, “Harry’s House/Centerpiece,” the story of a soon-to-be-emancipated wife written in two sections. Sweet Bird recalls the dry pieces of old, and the album ends with the mostly a capella “Shadows and Light.”

The references to painting are more pronounced on this album, replacing in one sense the use of colors on Blue, but it has become clear that Mitchell is that rare creature, like William Blake, equally at home in the worlds of images and words (and, of course, music). The centuries produce few of these, and they are to be treasured. The Hissing of Summer Lawns is itself a small treasure, part of a string of albums, Blue through Hejira, that stands as one of the greatest artistic achievements of the twentieth century.

All songs written by Joni Mitchell unless noted.