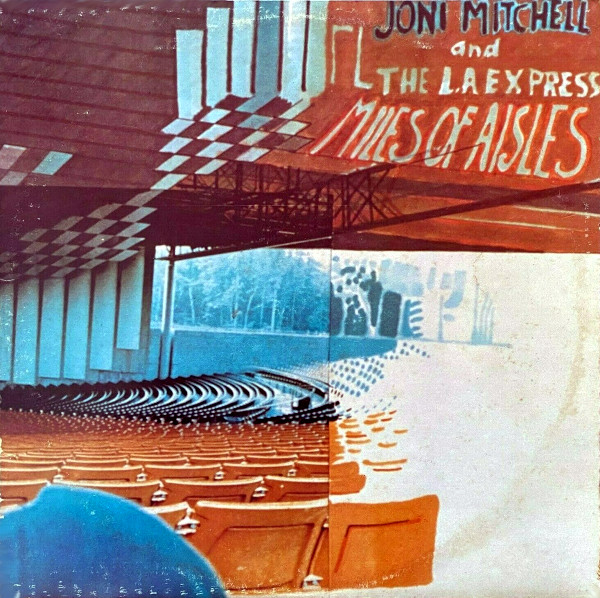 I find it interesting that, when people talk about Joni Mitchell, they invariably end up talking about themselves. Maybe it’s because her music makes a personal connection with the listener. A remarkably keen observer of self and her surroundings, the songs of Joni Mitchell are nothing if not detailed snapshots of a shared moment in time.

On Miles of Aisles, we have the opportunity to hear Joni share those moments in person with an audience. That sense of connection really only happens once, on The Circle Game, here presented as the concert’s climax of communion, but it’s one of those indelible moments that sticks with you, as so many of Joni’s songs do. The rest of the concert is split evenly between solo performances and backed by the L.A. Express. I expected that having a full-time band would elevate the songs into something better, more powerful. I was wrong. The words, the intense light of the guitar or piano and that voice have always been the source of her power. Despite the best intentions, the L.A. Express is largely superfluous for this setlist.

The Court and Spark tour itself (from which these performances are taken) featured more tracks from that album: “Free Man in Paris,” “Raised on Robbery,” “Help Me,” “Car on a Hill,” “Twisted,” “Just Like This Train.” I’m sure those sounded just fine with Tom Scott and his team. And Scott’s clarinet on Real Good for Free will give you chills. But a lot of the arrangements remind me of Steely Dan without the chops. That’s not a knock on the players themselves, just an indication perhaps that Joni and the group didn’t spend a ton of time re-arranging them. As the solo pieces prove, it’s hard to improve on perfection anyway.

It would be another twenty years before a Joni Mitchell greatest hits record would be released. For a long time, Miles of Aisles was the best way to hear the best of Joni in a single sitting. The songs, for the most part, follow the format of the originals and rarely run much longer. I don’t personally care for the new arrangements of Woodstock and Carey, yet I might prefer these versions of Rainy Night House and Cactus Tree over the originals. In an unexpected move, Mitchell closes Miles of Aisles with two new tracks, Jericho and Love or Money. They’re both unimpeachably smart songs. Even so, you get the sense that Joni may have mined this period of jazz-pop to its full extent and it was time to move on—which is exactly what she did on The Hissing of Summer Lawns.