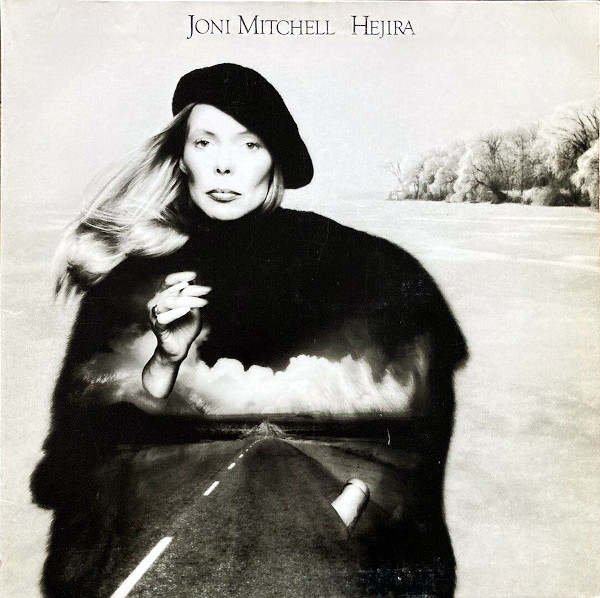 The third in a stunning trilogy started with Spark and Hissing from the only artist who could make German measles sound sexy.

Kronomyth 9.0: A prisoner of the black grooves.

It’s the luminosity of Hejira, I think, that beguiles critics into calling it Joni’s best album. This is the long ride back of reflection, where Joni Mitchell adds up the sum of her experience, calculates the cost of her mistakes and runs the risk of multiplying them again. What draws me into this album isn’t so much the poetry, though there is that, but the music. Each song is its own oasis. The presence of Jaco Pastorius naturally pushes envelopes, but Mitchell and Larry Carlton are right there with him, pushing, pushing.

Joni Mitchell albums before this had their dry patches of acoustic guitar or piano, instances where the lonely girl locked in her room on a rainy day might have been better served by puddle hopping. Their isn’t one stuffy song on Hejira. Reflective, yes, even sad, but the lonely woman is driving a convertible this time and the sunlight and fresh air swirl around every couplet. It’s more a refinement of past albums, the reaching of a place where Mitchell and her muse were on easy terms.

The opening trio of “Coyote,” “Amelia” and “Furry Sings The Blues” may be as strong a trio as Joni has led with, while “Black Crow” is one of the most amazing songs of her career and seems to anticipate the re-formed King Crimson by several years. Hejira is a heavy album insofar as all of Joni’s albums are heavy, but it’s the little miracles glimpsed in the music, along the side of the road, that turn it from bitter to bittersweet. Despite the presence of Pastorius, it’s not an overtly jazzy record but a deeper and fuller flowering of the subtle shift in shading since Blue. On the road to appreciating Joni Mitchell, Blue, Court and Spark and Hejira are milestones that every fan should visit often.

All songs written by Joni Mitchell.

Joni Mitchell (vocals, rhythm guitar, electric guitar on B3) with Max Bennett (bass on A3/B1), Larry Carlton (lead guitar on A2/A4/B2, acoustic guitar on B3), Chuck Domanico (bass on B3), Victor Feldman (vibes on A2), Chuck Findley (horns on B4), John Guerin (drums on A3/B1/B3/B4), Bobbye Hall (percussion on A1/A4/A5), Abe Most (clarinet on A5), Jaco Pastorius (bass on A1/A5/B2/B4), Tom Scott (horns on B4), Neil Young (harmonica on A3). Music directed by Joni Mitchell; engineered by Henry “Inspirational” Lewy; mixed by Joni Mitchell and Henry Lewy.