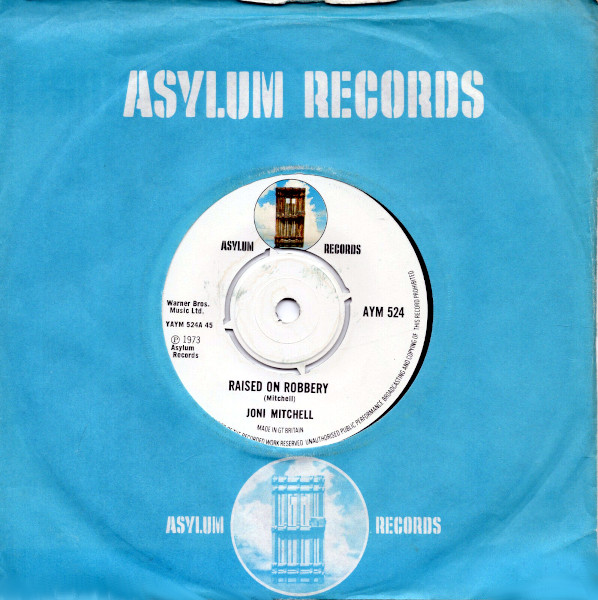 Not the worst song on Joni’s best album, but if you bought this hoping to spark your interest in Court, you were robbed.

Kronomyth 6.01: Joni, dressed up to beat The Band.

The first glimpse we got of Joni Mitchell, studio rock goddess, was this revved-up twist on The Andrew Sisters, “Raised On Robbery.” Now backed by a full band plus The Band’s Robbie Robertson on electric guitar, Joni multitracks her vocals in rapid-fire wordplay as a quick-talking pickup artist. She would have made a wonderful actress.

The flip side is the title track from her forthcoming album, Court And Spark. With its smoky jazz overtones and thoughtful brushstrokes of sound, it’s another wonderful painting for the collection. The connection between “Court And Spark” and her earlier work is clearer than “Raised On Robbery,” which is more of a novelty single (a rogue in the role of a noble) than a proper ambassador from Court.

Both songs are identical to the album versions. Honestly, “Raised On Robbery” is a terrible choice for the first single, a point confirmed when “Help Me” and “Free Man In Paris” charted much higher. “Car On A Hill” also would have been a better choice. I get that it’s exciting to hear Joni playing with an electric guitarist in a funked-up arrangement, but any major dude will tell you that the real jewels of Court And Spark are hidden elsewhere.