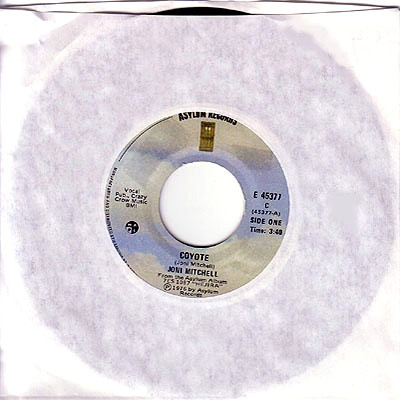 Rolling thunder along the highway and the first encounter on Hejira.

Kronomyth 9.1: Of eskimos and appaloosas.

An edited version of Coyote became the toothsome appetizer for the new Joni Mitchell album, Hejira. It’s one of those jaw-droppingly smart songs from Joni where the word images and sly melodies pour out like spilled paint. The song’s subject is a chance romantic encounter between a country mouse and city mouse, with the country mouse doing most of the chasing. I can’t recall what was edited out for the single, though I was surprised to see that a single edit existed; normally, the labels just use the elpee version for the single, since most Joni Mitchell songs come out of the oven perfect. “Coyote,” of course, cooked longer than most, having been written during Bob Dylan’s Rolling Thunder Revue tour. Joni also performed it during The Band’s final concert.

The B side is Blue Motel Room, one of my favorite songs from Hejira. It makes me wish Joni would make a whole album of blues songs. The lyrics again reference the highway, a common theme on the album. In this case, Joni makes a deal that she’ll give up traveling if her lover gives up fooling around. But the highway is also a symbol for freedom, and the listener knows by now that Joni wouldn’t give that up, so it’s a sweet but ultimately empty gesture, making this a lonelier song than its intimacy would indicate.