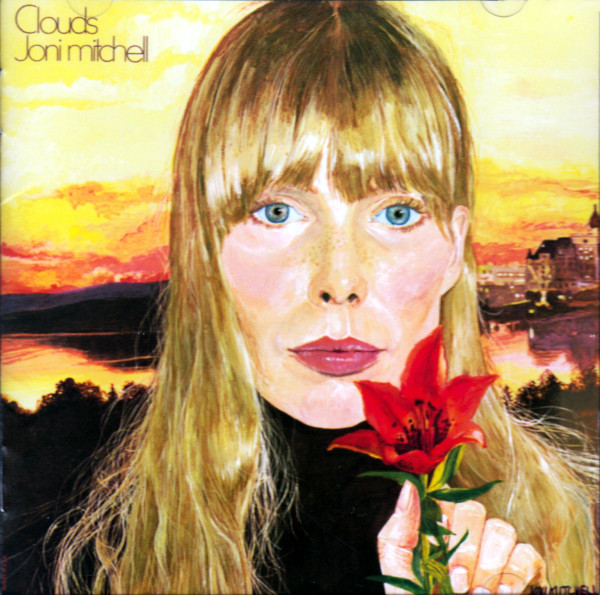 Her second album contains two of her best: “Chelsea Morning” and “Both Sides, Now.”

The songs on Clouds are sere and bitter with strands of sweetness. There is no accompaniment to speak of; a multitracked mandolin on “Roses Blue” and the a capella “The Fiddle And The Drum” are the exceptions to songs that otherwise feature Joni Mitchell singing and playing the acoustic guitar. Her first album had a presence, a resonance really, that allowed Joni’s music to ring in your head and fill the empty spaces. You’ll encounter some of that on Clouds—“Chelsea Morning,” “Both Sides, Now,” “Songs To Aging Children Come”—but mostly the material is quiet, barren, even bleak.

I had a similar reaction to her next few albums, as though the natural musicality of her muse now arrived stillborn. Whether it was a newfound confidence that allowed her to present her songs so unadorned, or the prickliness common to genius, is hard to say. Joni Mitchell was a charming record, and while songs like “Chelsea Morning” and “The Gallery” are beguiling in the best way, Clouds is the work of a serious artist. The opening “Tin Angel,” for example, is downright daring in its embrace of darkness.

The album’s warm reception is likely the beneficiary of Joni Mitchell’s rising star and the album’s two recognizable songs, “Chelsea Morning” and “Both Sides, Now.” The rest of the record is often quiet, occasionally disquieting, punctuated by lyrical and, less often, musical epiphanies. If this were Bob Dylan, we’d be talking about New Morning or John Wesley Harding. Her next album, Ladies of the Canyon, picked from a slightly wider palette of sounds, notably the piano, so you may want to skip ahead if you’re just getting acquainted with Joni, but you’ll come around to Clouds eventually because, when she’s good, she’s very very good.

All compositions and arrangements by Joni Mitchell.