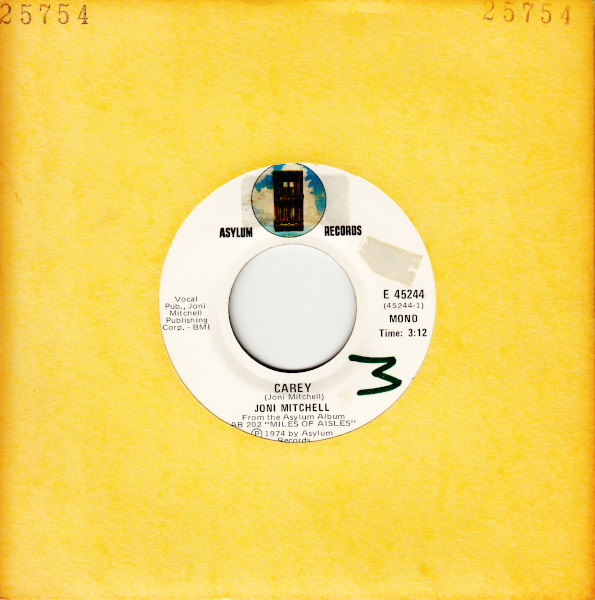 A lingering case of a mono version of Carey from Miles of Aisles that appears not to have been carried on the airwaves.

Some time in the springtime of nineteen seventy-five, this single slipped quietly into the US and Canadian markets: a back-to-back selection of songs from Joni’s recent Miles of Aisles that was released only in a mono version. It didn’t chart, didn’t get much radio play as I recall (although I was only 9 years old and more interested in The Monkees than Joni Mitchell) and, frankly, neither song would have been my first choice from Miles.

The version of Carey presented is tarted up in a quasi-reggae arrangement complete with Jerry Garcia-styled guitar solo. It’s exactly what you would expect if the Dead had covered a Joni Mitchell song, which they didn’t. Think about that for a moment: Grateful Dead have recorded everything that Bob Dylan ever wrote with the possible exception of shopping lists and post-it notes, yet to my knowledge (which is admittedly limited where the Dead universe is concerned) never recorded a Joni Mitchell song. (Talk amongst yourselves.)

The flip side features Jericho, one of two new songs that appeared at the end of Miles. The jazz-pop sound is vintage Joni, and the backing band is as smart as they come. Still, it wouldn’t be the first, second or third song I’d turn someone onto from this period. The analogy between the walls of Jericho and tearing down the walls of self-defense in a relationship is a clever one, but finding clever on a Joni Mitchell album is like finding cotton on the end of a Q-tip: you expect it before it ever reaches your ear.

One iota (as in “iota find something better to do with my time”) of interest: The A side appears to run about 20 seconds shorter than the elpee version. They may have cut out the beginning, I don’t remember, and unfortunately I’m too lazy to track down my plastic 45 rpm adapter, turn on the turntable, reconnect my headphones… aagh, I’m even too lazy to type it all (damn you to hell, digital age and your indolent ways).