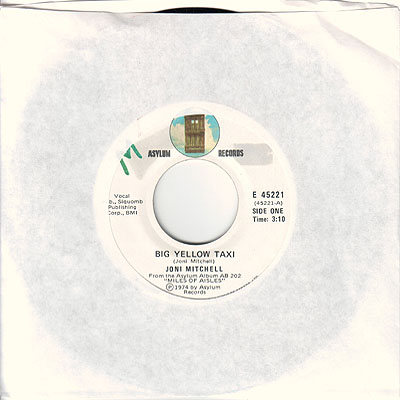 A slightly longer trip in Joni’s taxi with the L.A. Express along for the ride.

Kronomyth 7.1: Aisle be home for Christmas.

The first single from Miles of Aisles was a pair of tracks that first appeared on Ladies of the Canyon, now featuring the L.A. Express. Big Yellow Taxi was the big hit from the live album, presented here in a slightly expanded version with an extra verse about her house being knocked down by a tractor. I guess I prefer the original studio version because it’s more familiar, but both taxis take you to the same place, joy. There’s also a version of this song by Counting Crows and Vanessa Carlton, in case you hate yourself.

The flip side is the live version of Rainy Night House, which is much warmer than the chill original. The backing band really helped on these early cuts, transplanting them from the confessional into the sunlit outdoors. The arrangement here reminds me a lot of Steely Dan, an observation I’ve probably made about ten times before on this site and that likely points to a (not unintentional) deficiency of 70s jazz/pop in my collection.

One of the things that has disappeared over the years that I don’t lament is the live album single, which was rarely anything more than a promotional piece of plastic designed to drive record sales. If you wanted to promote an album, you needed a single on the radio to sell it, and if you were promoting a live album then you chose a single you thought the masses might willingly re-consume. In fact, there were very few live singles that went on to outshine the originals; maybe Cheap Trick’s “I Want You To Want Me.”