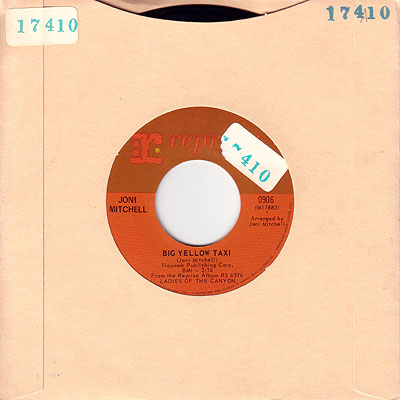 Give me spots on my apples, but leave me the birds and the bees and songs like these.

This is the single most important single in Joni Mitchell’s butterfly collection. On the one side, you have the deceptively breezy “Big Yellow Taxi,” a song that manages to connect a lost paradise with lost love in less than two minutes and makes it seem as natural as rain. On the other side is the impossibly heavy “Woodstock,” in which Joni bears the cross for her generation’s sins with a commission to return to the recent paradise of Yasgur’s farm. In between these two extremes lies a body of work that was remarkably influential and stands as some of the most intelligent music of its time. I would tell you that “Big Yellow Taxi” would make a fitting radio epitaph when the big black car takes her away, but we live in a world of pandoras and ubers and genetically engineered apples, and the work of Joni Mitchell is no more than an unwelcome pang of conscience to a world like that.